Call of Duty Wiki
Register
Don't have an account?
Sign In
Advertisement
in: Call of Duty: Infinite Warfare Quest Items

Talisman Masks are special collectables found in the Director's Cut versions of each of the Call of Duty: Infinite Warfare Zombies maps. They appear at the end of each easter egg after the player has obtained the map's respective Soul Key and also appear in another mini easter egg.

There are five Talisman Masks that the player needs to collect in order to unlock the final battle against Mephistopheles in The Beast From Beyond. Once the player has completed an easter egg in Director's Cut, a Talisman Mask will spawn in the same place as the Soul Key once it has been picked up. Picking up a mask will award the player a special calling card of the respective map and a green star will be added next to the map name in the pre-game lobby.

Talisman Masks also appear in another smaller easter egg on each of the maps. Once the player has unlocked Director's Cut, a special Talisman Mask will spawn at a certain location around each map, but only on Round 1. Shooting the Mask will reward the player three easter egg songs that the player can choose as their lobby music within the Barracks.

Each map rewards three different easter egg songs for the player to listen to in the lobby before a game. 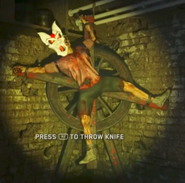 The Talisman Mask found in the Throwing Knife minigame on Rave in the Redwoods.