I think it is better if you put in Call of Duty pictures instead.

Well atleast there was an image. The images look very similar.

I can confirm this, a chestshot/necshot will oneshot the opponent (with stopping power ofc). Limbs and stomach however will need 2 shots~~

Where it is used? Edit 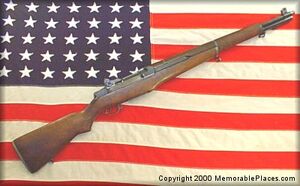 Okay, I know this is about a year late... but whatever.

If you're going by how it works in game, don't. There are many instances where weapons are incorrectly portrayed in the Call of Duty series.

More like every weapon in every COD game has multiple major inaccuracies compared to their real life counterparts. The M1 however does have SOME realistic characteristics, like it being powerful and accurate, but not being able to reload at will, and recoil being almost non-existant are of course completely false.

If you equip a sniper scope to the M1 Garand, does your character get physical camouflage (a gillie suit) or does that only apply to bolt-action rifles? Ryo626 11:25, 2 April 2009 (UTC)

I don't want to just remove something that might be important without mutual consent. I mean, if we should leave it, then we should add to it more and say it's "accurately portrayed as" such and such. If anyone knows M1's inside and out, you should do SOMETHING about the mentioning of the scope. We might end up having to do that to the rest of the rifles in the game, though... Akyoyo 05:15, 30 July 2009 (UTC)

On Xbox 360 at least. I was in a private match, trying to test it to see if I could fire at or near the max.

I used a beat generator to generate pings at 444 RPM, then tried to fire with the M1 Garand to keep pace. And I couldn't, not by a longshot.

It's a bit long, is most of it neccessary? -

Yes it is nescessary, its just as important to know the real history of the M1 as it is to know the game version of the M1, It also eliminates any misconceptions between the real M1 and the game versions. For example, the recoil on the WAW M1 isnt even close to half that of a real M1's recoil, if anyone fired an M1 as fast as some people do in WAW, they would dislocate their shoulder and wouldnt hit anything, and not to mention by the 3rd shot, the rifle would be at nearly a 90 degree angle. Also how in the older CODs, being unable to reload at anytime isnt true, as in reality, its YOUR rifle, and in combat, theres no drill instructor looking over your shoulder, in combat, nobody cares or pays attention to what you do with your rifle, its YOUR job to stay alive and defeat the enemy by any means, and if taking 5 seconds to reload while behind good cover and make sure you have all 8 shots and save as much ammo as you can is what keeps you alive, then that's your job, you or anybody else couldnt care less what some lousy manual-of-arms "recommends", when its your life that is at stake.

Who gives a shit that the video game version of a gun isn't exactly like the rl one? Darkman 4 19:31, May 30, 2010 (UTC)
Most dont, but theres alot of people who actually take what they see in games literally to the real life weapons. As I said before, its to avoid those silly misconceptions.

because you're committing a grave sin if you believe a vg gun is exactly like its RL counterpart. Darkman 4 19:38, May 30, 2010 (UTC)
LOL, and if you just let fictional facts take their course, over time, all the numbskulls out there will have fake facts produced by games mixed in with real life facts, hell I've seen websites that talk of the real M1 Garand and it mentions that it was unable to reload mid-clip!...Guess where that "fact" came from, and whats sad is that those sites had nothing to do with gaming and were prurely talking about the real M1. I dunno, just in my day games and movies were taken less literally and people only believed what they saw in person, not behind a screen, thesedays game and movie facts are being mixed with real facts, just kinda sad to me.

ITS A GUN. the world isn't going to explode if people think the M1 is like it is in WAW. most "common" trivia is wrong, but you don't see, say chemists explaining what things like atoms really are. Darkman 4 19:53, May 30, 2010 (UTC)
Well no it wont, lol, but you post on a gun forum to discuss firearms with other gun owners and theres always a guy or two posting: "What kind of perks can the m1 grand attach to it?" or "How much are aperture sights for the m1a1?" Then of course those guys are instantly chewed and cussed out by real shooters. Its just irritating having COD kids posting in serious gun forums and saying they know what they're talking about because they've seen it on COD.

::It never hurts to add a few lines of truth about them though.

I agree, there needs to be a "real life facts" about the weapons, then a "in-game" facts section. Its things like "No in real life info" that make so many people see Call of Duty as more of a cult among ignorant little kids with no concept of how real war is, or how the real world works. I mean, every other war game Wikia out there has real life info about their weapons, I mean just look at Brothers in Arms's wikia site!, great real life info, and great game facts. —Unsigned comment was added by 216.73.204.59

::No in real life info, finnal.

Just to clear this up: it is indeed possible (though difficult) to top up a placed en-bloc clip, and relatively easy to eject one from the weapon: there is, however, little to no evidence that soldiers made any habit of doing this in combat. The drill was to fire off all rounds before reloading, and our anonymous friend up there doesn't seem to realise that manual-of-arms is not a suggestion, it's to train your reflexes so you can perform an action without thinking about it when under pressure. The only reason not being able to reload it stands out is that in general in a videogame you reload much too often, thanks to having the FPS Elves living in your webbing to reorganise your half-fired mags into full ones; it's not the Garand that's wrong here, it's everything else. Evil Tim 11:01, February 27, 2011 (UTC)

Theres plenty of proof of reloading a Garand rifle mid clip in combat (obviously while behind solid cover and not in immediate danger), my grandfather, and a number of WWII veterans I've interviewed over the years, have said it was just as common for troops to eject a partial M1 clip and reload in a new one as it was to replace a Thompson or Carbine magazine part waythrough, to aways ensure you are loaded and locked and ready for anything. Though (most) times when suppressing the enemy directly as the assault team flanks, you'd fire the whole clip. For the record the Manual of Arms said for ALL smallarms to be fired till empty, not just the M1, ie, Thompson, BAR, Carbine, Grease Gun, M1911, ect. So if "manual of arms" is being used in the game, then by that standard, then NONE of the weapons should be able to reload until the clip or magazine is finished. According to veteran's statements and testimonies, when in combat, field and training manuals are the first to be largely disregarded, since now its your life at stake, something not encountered in the calm safe conditions of bootcamp.

"It's YOUR weapon, and YOUR very life at stake, an arms manual book is good for occasional references in the field, but not anything to bet your life on, remember, the ones who wrote that book have never seen battle, and only address a single ideal situation when describing firing techniques, when in reality, there are near infinite senerios and situations you'll be facing, so you reloaded accordingly." quote from my grandfather, who served 3 tours of duty with the 2nd Marine division in the Pacfic in WWII.

Anecdotal evidence is not proof. I have no reason to believe any of the people you claim to have spoken to even exist; proof is documentation, printed interviews proven to come from real soldiers, etc. There is a strange lack of such when it comes to claims that the Garand was frequently reloaded using the clip latch, probably because this was mainly used for unloading the weapon after combat, not during. Evil Tim 12:40, December 26, 2011 (UTC)

Some things i noticed in MultiplayerEdit

I noticed some things in multiplayer, that during the Garand's mid-reload animation, you can see an extra clip inside when you're prone. The Marksmen challenges between the Rifle Grenade and the Sniper Scope have also been mixed up.

When your character is moving the M1 Garand's sniper scope up if you look closely, you will see that the recticle for the Telescopic Sight is used instead of the normal sniper scope recticle.

there is no scoped m1 garand in cod 3 your looking at the cod waw page Ztormtrooper 03:27, May 29, 2011 (UTC)
:::: by cod waw page im saying your looking at the section obout cod waw and the m1 garand above is from cod waw as there are no telescopic sights in cod3 there are only sniper scopes rifle grenades and iron sights so simple i love it Ztormtrooper 03:29, May 29, 2011 (UTC)

It is extremely hard to reload an M1 Garand mid-clip? So that's a mistake. I think... AwesomeSauce360 talk

US Marines in the Pacific (early on) used Springfields, did they not?Edit

I was under the impression that the Marines used Springfields, as they were not nearly as modernised as the Army. At this conjecture I will point out I am quoting a documentary, a historical book, a video game and the TV series, the Pacific, in which Marines use Springfield M1903s, and a point was made in the Pacific, which has won awards for accuracy, about the Army's better equipment.

Yeah, and the Marines' campaign is set in mid to late war periods. At which point, the garand was starting to be issued to Marines. Although starting missions with that outdated rifle would have been fun as you have been searching for the Garand to replace it.

Retrieved from "https://callofduty.fandom.com/wiki/Talk:M1_Garand?oldid=2391009"
Community content is available under CC-BY-SA unless otherwise noted.