Is there a source for the name of this helicopter? Because comparing it to the RAH-66 shows quite a few aesthetic differences.

Crazy Sam, the link for the stealth chopper sent me to wikipedia, RAH-66 Comanche. Also comparing the two, only minor differences exist and I believe Treyarch modelled the Stealth Chopper after Comanche.

Here is a comparison of the real life RAH-66 and the in-game one. 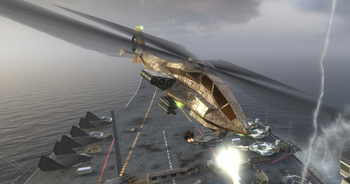 Do remember that BO2 is set in the future, so they could have upgraded the Comanche you know.

So they moved the rotor from being below the two wings at the back to being above them? Also, because you put your sig in your preferences, and leaving ~~~~ after your posts, its leaving behind a bunch of code. To fix this, copy and paste {{Nosubst|Signatures/ShadowMan177}}~~~~~ into your preferences, thanks.

Retrieved from "https://callofduty.fandom.com/wiki/Talk:RAH-66_Comanche?oldid=2182090"
Community content is available under CC-BY-SA unless otherwise noted.