like this picture but look dirty a bit in game: 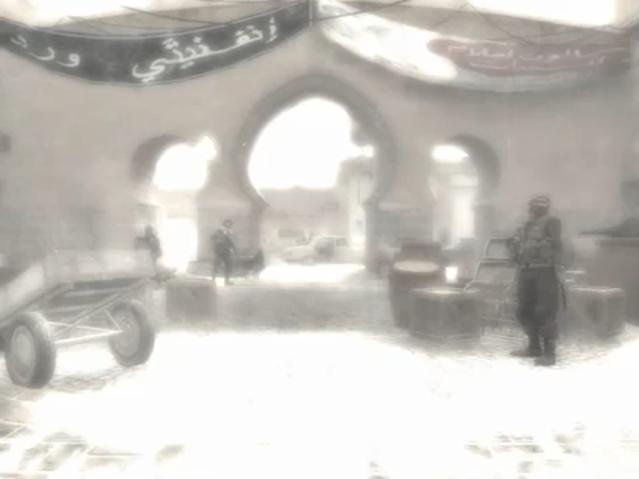 While Al-Fulani is being dragged to the car, you can see a banner on the top-left side with Arabic writing. It actually says (إنفنيتي ورد) = Infinity Ward. I don't own Modern Warfare, but I can speculate there are more Easter Eggs like this, especially in non-English text. -- Al-Malik ملك الألعاب 11:03, November 13, 2009 (UTC)

Wow man, that's pretty cool. I don't think any one would have noticed that. It takes a person with a good eye to notice easter eggs like those. Pesky IW with their sneaky easter eggs :D Thumbs up for finding that! Cpt. Carebear 9:09 (AEST)

Thank you! :D Although, to be honest, if you're an Arabic-speaker, it kind of sticks out a bit, like if it was written in English to an English-speaker. The thing now is, where/how can I note this in the wiki? On this page? On another page? On more than one page? -- Al-Malik ملك الألعاب 06:16, November 14, 2009 (UTC)

Probably the best option is to add it on to the Coup page itself....in trivia will be satisfactory. Just say something like "The flags at the beginning of the level (? Haven't played it in a bit) says Infinity Ward" then post the picture somewhere....yeah, I'm not much of a help. Sorry, but anything to help a person, I'm still recovering from work (laughed my head off...bosses are nuts). Cheers. Cpt. Carebear

I just realized something while playing last night: the dogs. I'm not an expert on Islam or Middle Eastern cultures, but from what I've read, dogs are unclean in Islam while cats are revered because Muhammad loved cats. So to have the dogs not only used by the militants, but also seen living in people backyards in kinda strange. Of course there are lots of variables. Not everyone in that country has to be a Muslim, etc. It could also be the Russian influence due to the collaboration of the two groups. Anyway I didn't want to intrude into the trivia section without having it considered by others, so here it is. 75.79.63.142 19:08, November 23, 2009 (UTC)

It’s true that Islam considers dogs to be unclean according to the teachings of Muhammad. (I haven’t heard the part about the cats though, as historical accounts note his interaction with various other creatures as well, including birds, camels, etc.) It’s rare to find domesticated dogs in the Middle East, especially in the more conservative Saudi Arabia. However, several Saudi law-enforcement divisions use detection dogs to find explosives, drugs, etc. This is not unusual because Islam allows for the domestication of dogs to be used in certain tasks, such as hunting and guarding; these are considered exceptions. In the games, since the OpForce are presumed to be members of the former government’s military, the dogs they’re using are perhaps police dogs. There could be influence from the Russian side of the OpForce, as they might have encouraged dogs to be used more. The dogs in the backyard, while I haven’t seen them, could be from the exceptions I mentioned (hunting dogs, guard dog, etc.) or dogs belonging to non-Muslims (which is common.) They could be even be wild dogs, too. Of course, this is all considering the game-makers knew about all of this, otherwise it could be that they simply didn’t notice. -- Al-Malik ملك الألعاب 13:57, November 24, 2009 (UTC)

We had to shoot people's dogs all the time when we went through the cities; they're all over the place in Iraq, both domesticated ones, and packs that roam the desert outside of the towns (especially in more rural areas). Just sayin, there's not exactly a dog shortage over there. MarinesNeverDie 05:33, January 1, 2010 (UTC)

In Modern Warfare 2, what is Khaled Al-Asad actually saying? Please provide a transliteration and a translation as soon as possible. Baker78 05:51, February 23, 2010 (UTC)

Retrieved from "https://callofduty.fandom.com/wiki/Talk:The_Coup?oldid=1859522"
Community content is available under CC-BY-SA unless otherwise noted.