Because of the page's problems, it was added to the improvement drive. If you think its good enough to be out of this, start a vote on Call of Duty Wiki: Requested Improvement Drive Articles.

Is it confirmed? Cause it looks like someones just duplicated it?

No, it's confirmed. However it's unusable without modding. 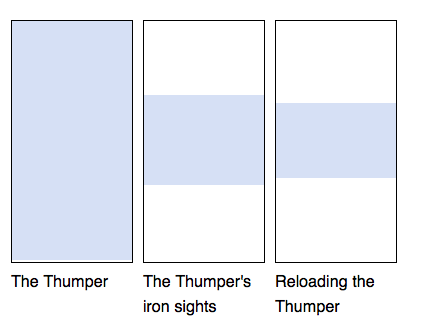 What's wrong with it?

How do you aim the Thumper? Edit

I am having a lot of trouble aiming this weapon and the under barrel grenade launcher attachment in multiplayer games. The Thumper, of course, supports ADS, but I find that mechanism baffling as well. Is there a rule of thumb that can be applied to either mechanism?

The actual sight has tick marks which I presume delineate range (e.g., 100, 300, &c.). Are these meters or feet? I suspect the latter as 300 meters is quite a distance given the scale of the maps deployed for multiplayer.

Anyway, I am seeking advice and direction so that I may better use this weapon to accomplish the Danger Close mastery award. Thanks in advance to any and all who can provide some helpful pointers.

"The Thumper, along with Model 1887s, are both weapons that appeared prominently in Terminator 2."

Is it really necessary? I think it's just a coincidence 1887 and Thumper appeared in T2 and MW2,not a reference to that movie.That's like saying District 9 references Halo with the NTW-20 sniper rifle(Ok,it may not be a coincidence as D9 director was originally going to make a Halo movie,but you get the point.)

So.. I saw the M79 page and well I couldn't help but research it on wikipedia. It says that "Thumper" is the nickname for the M79. Well, if you think this informaton is related too much about real-life, check this video out: http://www.youtube.com/watch?v=sq4apUIi2yY

It sorta verifies my claims at the 0:20 time mark. Their aesthetics are indistinguishable.

So if anyone agrees with me, I'll move the M79 page info to this Thumper page or vice versa.. whichever is more appropriate.

I personally think we should merge both pages, both are exactly the same. So I vote for a merger

Well, the first bullet of "Duck Test Section" of the Naming Policy page says "If a weapon looks the same, functions the same, but is named differently, merge". Joseph Tan 14:44, April 27, 2011 (UTC)

Oh that's for guns that are across two games but are named differently. We put that in to stop people trying to seperate articles like the StG-44 into StG-44 and MP-44. That doesn't apply to real life things, otherwise the Intervention would be called the Cheytec M200 Intervention and so on. Smuff[citation provided] 14:53, April 27, 2011 (UTC)

Debating is fun. Uhm, I took the pictures for the Type 99 and in Final Fronts it's simply called called "Type 99" but in the Type 99 (LMG) page, on top, it says "This article is about the light machine gun. For the World War II rifle, see Arisaka." The Arisaka and the Type 99 are therefore one and the same. If the rule applies with the Arisaka which is named "Type 99" in Final Fronts, shouldn't the rule apply with the Thumper? Joseph Tan 15:02, April 27, 2011 (UTC)

The Arisaka is called "Arisaka" in Call of Duty: World at War and Call of Duty: Zombies. Since it's called "Arisaka" in two separate games compared to "Type 99" in just one, it's called Arisaka based on a majority rules sort of thing. Just mention on the Arisaka page that the gun is called the Type 99 in Final Fronts. Smuff[citation provided] 15:10, April 27, 2011 (UTC)

Retrieved from "https://callofduty.fandom.com/wiki/Talk:Thumper_(weapon)?oldid=2113429"
Community content is available under CC-BY-SA unless otherwise noted.