"Canadian Special Forces. Raised by a blended First Nation family in Ontario. Recommended to Warcom after serving with Griggs in Urzikstan. Earned commendation in daring midnight raid of an AQ encampment."
— In-game Biography

Talon is a Warcom Operator of the Coalition faction featured in Call of Duty: Modern Warfare. Talon was released on March 26th, 2020 as part of the "Talon Operator Bundle" during the Season Two of content for Modern Warfare. 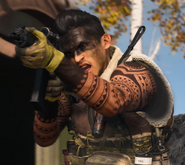 Retrieved from "https://callofduty.fandom.com/wiki/Talon_(Operator)?oldid=2509980"
Community content is available under CC-BY-SA unless otherwise noted.