"They took my family and my home, and I intend to take their lives!"
— Tanya Pavelovna on sniping Germans

Lieutenant Tanya Pavelovna (Russian: Таня Павeловна) was a female soldier in Call of Duty: Finest Hour who fought for the Russians during World War II. She is the first playable female character in the whole series.

Tanya's home village of Pitomnik was a small and comparatively isolated community located within the western realm of Russia. This isolation served to somewhat blind the village inhabitants to the specific details of the Great Patriotic War, even though they knew it existed and was raging on.

Tanya knew little of the war in Europe, even after the Germans invaded the Soviet Union in 1941. Her home village of Pitomnik was small and isolated, cut off from the everyday realities of what would become known to all Russians as The Great Patriotic War.

The date on which German Armed Forces entered and took the village of Pitomnik is unknown. However, what is known is that Tanya was quickly separated from her family, whom she never saw again. Fleeing through the woods, she was picked up by a patrol from the Red Army. She joined up soon after.

Some undetermined time later in an undisclosed location, a patrol Tanya was a part of was ambushed and cut to pieces by the Germans, forcing her to take shelter in a collapsed building. There, she discovered a scoped Mosin-Nagant rifle alongside a fallen comrade. Allegedly with the voice of her father guiding her aim, she scored four kills before she was retrieved by additional Red Army forces.

This action was reported to Headquarters, and soon enough Tanya was reassigned as a sniper and deployed in Stalingrad.

Lieutenant Pavelovna spent the majority of the day attempting to hunt down a sniper from the German side, pursuing him throughout the ruins of Stalingrad. She finally caught up to him at Mamayev Kurgan, waiting for him to expose his position before she pounced, eliminating him with one shot. As it turned out, the opposing sniper's target was Private Aleksandr Sokolov, who was saved only by the selfless action of Sergeant Oleg Puskov, who shoved the private aside and took the bullet himself in the head.

Tanya gave Private Sokolov the task of leading their men up through the park to conquer the Observation Bunker placed at the top. She gave covering fire as best as she could from her new position, and ultimately Mamayev Kurgan fell to Russian hands.

Sometime afterward, Tanya offered Aleksandr a job as her 'Spotter', which he readily accepted.

Lieutenant Pavelovna's actions began with the objective of destroying a German Mark IV Panzer by means of a deployed land mine. First, however, she had to attract the Tank's attention by the systematic removal of Wehrmacht Troops in the immediate area. After eight or so kills, including one Officer, the tank arrived in force. After Tanya sniped the three Tank escorts that traveled with it, a Russian sapper threw a land mine in the tank's path and blew it up.

A new objective was soon discovered; at the behest of Pvt. Mikael Kirelenko, who had just discovered them, Tanya was obliged to follow him to the old Tractor Factory converted into a Tank Depot and help reinforce the defenses there that were taking fire. However, the above-ground route was quickly eliminated by the presence of another Mark IV Panzer which made mincemeat of the attacking Russians. There was little choice but to proceed into the sewers.

Once below ground, Tanya, Aleksandr, and Mikael soon encountered sporadic German resistance and Soviet allies amidst the labyrinth of tunnels and wreckage. Tanya survived this ordeal and finally emerged back above ground, only to be forced to navigate a trench work system being shelled by mortar fire before the group could arrive at the factory.

From there, Tanya and Aleksandr set up shop on the gangplank above the main factory doors. Relying on her Spotter for accurate sightings, Tanya methodically shot down German soldiers who were advancing on the factory, giving key emphasis on Panzerschreck and MG42 Gun crews. The factory was defended in this way until the Russian tank crew lead by Lieutenant Nikolai Badanov made it back. After a brief moment where Tanya had to help to patch up Sgt. Fyodor Belinki, she hitched a ride with Badanov, Aleksandr, and the crew and evacuated from the factory.

A short while later, engine trouble forced the tank crew to try and hide the tank in a safe place so repairs could be made. Tanya was urged to seek high ground in order to spot and observe any nearby German activity. Activity did come in the form of German Bombers accompanied by Infantry. Tanya held her ground and killed whatever Germans she could until an arriving Panzer IV made short work of the building she had chosen as high ground.

Tanya was wounded in action, but was still able to retain consciousness as Aleksandr and an unknown comrade helped carry her back to Headquarters.

For "The Flag Must Fall ", Tanya is strictly an NPC armed with a scoped Mosin-Nagant rifle. She is not overly useful in the mission itself, aside from removing the sniper in a cutscene and giving Aleksandr his orders.

However, Tanya becomes a playable character in "Dead In Her Sights" and "Defend the Factory". The scoped Mosin-Nagant remains her primary weapon, but now she can pick up the standard assortment of Russian and German weaponry as she progresses through the levels.

By "Breakdown", Tanya is once again an NPC. Much like "The Flag Must Fall", her involvement is relatively scarce and brief.

In The Flag Must Fall 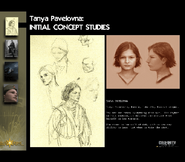 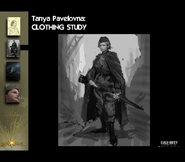 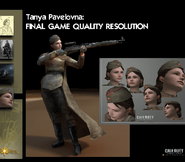