Get in the Humvee.
Standby for airstrike.
Scan for hostile activity. Do not fire unless fired upon.
Destroy targets of opportunity.
Get eyes on the school.
Terminate the enemy presence in the school.
Report to General Shepherd at the rally point. 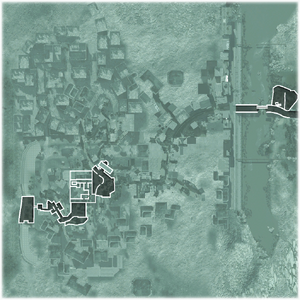 Depending on the version of this mission being played, the remaster features an extended introduction where the player's vechicle being destroyed by a RPG before the player escapes from the vehicle and starting the level proper. The player will assume control of PFC. Joseph Allen. The level will start off with the player lying on the ground as General Shepherd stands over the player and helps him up. After defending the M104 Wolverine Bigfoot with direct fire support by eight M1A2 Abrams tanks and one M1128 MGS, among them High Roller, Binky, and Bugs, who is laying the bridge, the level continues and the player must get in a Humvee, called Cruncher. The player then takes control of the minigun. As the convoy drives through the streets, several OpFor will open fire on the Humvees. After an RPG destroys the vehicle, the player must then clear out a nearby building. Hunter 2-3 informs the squad over the radio that they are taking heavy fire inside a school. Sgt. Foley's team (Hunter 2-1) go in to assist. Then, the player must meet up with General Shepherd at the rally point who personally tells Allen that he's taking orders from him from now on.

PFC Joseph Allen wakes up from a shell-shock on the ground (the explaination of this is due to a RPG destroying the vehicle he is in, which is seen during the remastered mission). General Shepherd, while reloading his .44 Magnum, notices Allen and helps him get up. Allen pulls out his M4A1 Grenadier and fires on the targets on the opposite bank. A tank named Bigfoot is trying to lay the bridge-layer.

Some Rangers call an airstrike on a white building on the far bank. After some time, enemies with RPGs appear on the bridge. Allen, with some other Rangers clear the way for the bridge-layer.

The bridge-layer is laid and Bigfoot crosses it. Foley informs the team to get in their humvees. Allen gets up the stairs in the bridge and mans the minigun on his humvee named Cruncher. There are other humvees too. Some Rangers clear their confusion on 'Which building is it?' The airstrike comes and the humvees begin to run.

After crossing the bridge, dust covers up the road and visibility reduces. Civilians run into their homes in astonishment. Three people scout the convoy from a balcony near a turning. Suddenly, the convoy takes fire. Some OpFor soldiers with RPGs run on the rooftop of a school. The miniguns roll, but an RPG hits Allen's humvee. Fortunately, it doesn't blow up, so it backs up and takes a right turn.

Militia attacks from all sides, and they drive wildly. A technical appears and starts shooting. Allen takes it out and the humvee pushes it until it turns right at an intersection. But again, an RPG hits the humvee and this time, it is destroyed. They get into a enemy-occupied building and clear it.

They come out of the back door and enter the same school they took fire from. They clear the playground, and enter the hallway. Enemies start shooting from the classrooms. The team, after clearing them, gets to the second floor. They clear the hallway and then, the staffroom. They reach the back door and kill a hiding enemy. The run through the lane when a group of enemies run across the road. Allen clears them out and reaches the rally-point, where General Shepherd informs Allen that he will taking orders from Shepherd now.

Shepherd at the beginning of the level.

Joseph Allen on the Humvee's Minigun.

Building before being destroyed.

A Ranger signals for the convoy to move.
Add a photo to this gallery

Retrieved from "https://callofduty.fandom.com/wiki/Team_Player?oldid=2523283"
Community content is available under CC-BY-SA unless otherwise noted.