Team Support is a feature introduced in Call of Duty: Ghosts Extinction mode. It allows a player to put down a cache that other members of the team can collect and restock items from.

Team Support will supply players with either a temporary buff or provide miscellaneous supplies.

Team Support is among the least expensive items in the game to deploy. Unlike with Ammo crates, players typically place a heavy emphasis on having a variety of Team Support available when playing in groups in order to maximize the variety of support provided. 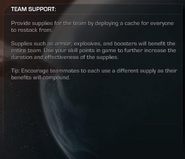