Charlie Don't Surf, Death From Above, Team Player, The Hornet's Nest, The Enemy of My Enemy, Endgame, Back on the Grid, Return to Sender, Old Wounds, Traffic, Vengeance, Rise & Fall

Technicals are seen in "Charlie Don't Surf" and"Death From Above" in Call of Duty 4: Modern Warfare. They closely resemble older models of a white Toyota Hilux or an early 2000 extended cab model of a Chevrolet S-10. They are 4WD pickups, each with a mounted and unusable 50cal. MG on them. A destroyed technical is also seen in the back alley of the multiplayer map Crash. In "Charlie Don't Surf", the car approaches after the player makes it to the road.

There are at least two technicals seen in "Team Player". The Militia has three technicals in "The Hornet's Nest" with a Browning M2, in two cases the gun is usable. Shadow Company in "The Enemy of My Enemy" have their own version of a technical, apparently based on the DillonAero Tactical Vehicle, a black "Vioxy DX5" (in-game pseudonym for Chevy Suburban) SUV with a mounted Gatling minigun concealed by a hatch on the roof, though these are not, by definition, technicals. Technicals that are used by the OpFor can be seen in "Endgame".

They appear in the mission "Back on the Grid", "Return To Sender" and "Down the Rabbit Hole", and are used by the Africa Militia and Ultranationalists. Technicals may come with some paintjobs on the side of the bed and on the hood.

Enemy technicals appear in certain Mission Mode operations, specifically "Smack Town", in which the player must destroy two jeeps fitted with mounted machine guns. They are also encountered in "Toxic Paradise", "Server Crash", "Flood the Market" and "Fire Mission". "Hostage Taker" seems to have some kind of technical with a turret on it but this is never used.

The Technical appears in several missions. Players can use the M2 Browning Machine Gun if the vehicle is intact, except the one found in the slums in the mission "Suffer With Me".

The Technical reappears in the mission "Traffic", used by the KVA. This time, it sports a cleaner, white appearance and resembles more of a dedicated military vehicle rather than an improvised one.

Technicals can be seen throughout the Call of Duty: Black Ops III campaign. They have mounted machine guns on them generally, which the player can use. In the mission "Vengeance", the 54 Immortals use a variant that mounts an automatic grenade launcher instead.

Non-playable Technicals can be found on the Multiplayer map Madagascar.

An OpFor soldier manning the M2 on a Technical. 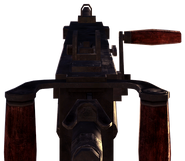 The Shadow Company's version of the Technical.

A Technical operated by the Brazilian Militia.

A militia member manning a M2 Browning on a technical, on the mission "Return to Sender".

Yuri on the Technical.

Technical used by Ultranationalists. Note that license plates read "2009 IW4", indicating that the model is simply reused from the Modern Warfare 2. 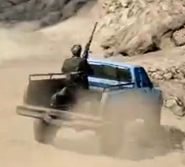 A technical with a mounted M2 Browning Machine Gun.

Front view of the Technical.