"This charge-shot rifle discharges arcs of electricity that shock targets and disrupts their nervous systems before chaining to nearby enemies."
— In-game description.

In Black Ops III, the Tempest is restricted to Prophet, but can be used by Blackjack via his Rogue ability.

When an enemy is hit by the Tempest, they are considered dead with electricity running through their body. After a short while, it arcs to any nearby enemies, killing them as well. There is no limit to the amount of enemies it can chain to. The chain will stop once there are no more nearby enemies it can link to.

The Tempest has a slight firing delay as the weapon must be charged before it fires, meaning that the player must keep aim on an enemy or risk missing. The reticle is part of the HUD but is still visible when aiming down the sights, which is normally an empty box. However, in Hardcore modes, the reticle is missing, making aimed shots much more difficult to land. The Tempest makes a distinctive firing noise, almost reminiscent to a lightning strike.

The Tempest in first person 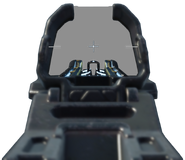 Prophet aiming his Tempest in his profile

The Tempest's electric arc chaining to other enemies.

In Black Ops 4, the Tempest is exclusive to Prophet and has been completely reimagined into a prototype automatic bolt-action dart gun.

Along with a new look, the Tempest now incapacitates enemies instead of instantly killing them. Downed enemies are forced into third person and cannot perform any action except move.  Enemies will take constant damage while downed, to a max of 100 damage from a single shock.

The Tempest chains similarly to Black Ops 3. When an enemy is shocked, after roughly half a second, the lightning will chain to all enemies nearby. Those enemies will also chain after the short delay, until no chains are left. Lightning will not chain back to downed enemies unless another shot is fired.

The Tempest will always kill an enemy who is already downed if they are hit with another shot or a new chain, regardless of their health. Like other specialist weapons, the Tempest awards +25 extra score for each kill, with a bonus +25 score for each enemy chained in a single shot.

Unlike in Black Ops 3, the Tempest fires immediately when the trigger is pulled, and has a shorter delay between shots as the bolt is pulled. Unlike other bolt-action firearms, the Tempests bolt is automatic and rechambers itself after every consecutive shot.

Two perks can counter the incapacitation of the Tempest. Tactical Mask severely reduces the shock time, allowing the player to stand up much faster, while preventing the Tempest from dealing its full damage. However, the Prophet receives a notification when a target has Tactical Mask, so they may prioritise you before you can get up. Skulker also greatly increases move speed while downed, possibly allowing an escape.

In lore, the Tempest is technically known as the TR-21 and utilises an experimental gas-powered system to fire 1.2k volt electricized darts within an automatic bolt-action system. It was developed by Grayden Laboratories for the United States government. While the TR-21 was created in the US, the scope was made in Germany.

Early Concept Art of the Tempest by Will Huang.

"Hold the fire button to build up power and send a bolt of lightning at the target. Hits up to nine nearby enemies."
— Description

The Tempest returns in Call of Duty: Mobile as an Operator Skill.

The Tempest can blast bolts of electricity at the enemies, killing them on a direct hit and immobilize them if hit nearby. The weapon can only fire after a short charge up. If the player release the fire button in the middle of the charge, the weapon will not fire.

In Battle Royale, the Tempest sports a unique splash damage effect, making a missed shot less likely to be wasted, unlike in default multiplayer. It can one-shot enemies without armor on a direct hit, but it will take 3-4 shots to kill well-armored enemies, if the player can score direct hits. The shot will immobilize enemies if hit nearby. From Season 10, it fires Ballistic Expert ammunition, allowing it to be reloaded once the mag is empty. The Tempest can only be found in Airdrops as a Legendary weapon.

As of Season 11: Final Snow, Tempest is available as one of Legendary ground-loot weapons in Nightmare Mode of Undead Siege, using Ballistic Expert to deal splash damage that paralyzes zombies in range.