For other uses, see Zombie.
For the Call of Duty: Mobile character, see Templar.

"You should not have disturbed the graves of the ancients!"
— Takeo, after seeing the main tomb in Origins

Templar Zombies, also known as The Ancients and Crusader Zombies, are a type of zombie that appear in the Zombies map Origins. They originate from the various Crusader Knights that fought in The Great War against the Apothicons alongside the Keepers, as noted by the Black-Sun sigil on their uniforms. They have two different models, depending on the circumstances the zombies spawn.

The first type of Templar Zombies have medieval helmets similarly to the golden helmet and have a white-red uniform with a small Black-Sun sigil in the middle of the cross. They also come with either a small pouch and a sheathed sword attached to their belts. Some of them also have grey beards. In the Origins intro their eyes are colored in bright Purple-Blue. In Black Ops II, they gain blue eyes, while in Black Ops III, they retain the normal orange eyes that the rest of the Zombies possess.

The second type of Templar Zombies have crowns on their heads, and have a glowy and big Black-Sun sigil in the middle of the armor. In addition to their knight garb and sword, they appear to have blue electricity going through their veins, while their eyes shine in a Purple-Blue color.

The first type of Templar Zombies only spawn in the Elemental Staff Tunnels and in the main chamber under the "Pack-a-Punch" in the Excavation Site. When they spawn they can join in with a horde of standard zombies.

The second type of Templar Zombies can spawn in different occasions. They spawn in normally in the Crazy Place and count in with the rest of the zombies, granting the players points as usual.

In another occasion, the second type of Templar Zombies will spawn when the player activates a 115 Generator, coming out of blue portal holes in the ground. The Zombies keep spawning as long as the generator's activation bar has not loaded. In this occasion, players get 10 points for each killed Templar, over the first 10 kills per group that spawn (totaling to 100 additional points per generator), after which they give 0 points, but will still count as a kill. They will not yield 10 points if shot non-lethally unlike standard zombies, and they do not count towards the 115 headshots required for the challenge in Rituals of the ancients.

In a different occasion, every few rounds a bunch of the second type of Templar Zombies spawn through the blue portal holes to attack one the 115 Generators in attempt to shut it down. To prevent this, the player has to kill all of the Zombies that attack the generator before the generator's bar goes down. Successfully preventing the attack will reward the players with a Max Ammo that drops from the last killed zombie. Failing to prevent the attack will lead the zombies to attack other generators.

The Templar Zombies have on their chests the same symbol as the keepers have own their chests. The symbol is known as the Black Sun symbol. According to the timeline, the zombies emerging from the tombs are undead knights from The Great War. Origins' main chamber was constructed by the crusaders in order to honor the fallen warriors of The Great War, and further features statues of Primis with the same symbol of the Black Sun.

According to a radio from Ludvig Maxis, the 115 Generator's conversion process creates the portals from which the Templar Zombies (of the second type) arrive, where the portals are described as "localized energy fields".

The same Primis statues from Origins can be found in the map Der Eisendrache, built by the Wolf King, which has fought with many knights on the battlefields of The Great War. One of them, Sir Pablo Marinus, describes himself as a knight returning from the Crusaders, which matches with the Templar Knights themselves.

A cluster of Templar Zombies.

The symbol seen on the Templar Zombies' Armor in Call of Duty: Black Ops II. 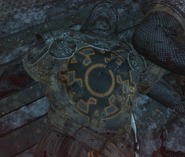 The symbol seen on the Templar Zombies' Armor in Call of Duty: Black Ops III.

The Black Sun symbol as seen on the dead Knight's chest.