For other uses, see Brooks.
"Poor bastards..."
— Brooks seeing the scientists burn to death after the missile is destroyed.

Special Agent Terrance Brooks is a CIA field operative that appears in the Call of Duty: Black Ops campaign missions "Executive Order" and "WMD." He is also heard over the comms in "Redemption". He has an account in the terminal by the name tbrooks.

Brooks is first seen in "Executive Order" with Bowman. After they take out two guards while disguised, The two join up with Frank Woods and Alex Mason to save Weaver and sabotage "Soyuz Two." They rescue Weaver before Brooks splits from the squad with Bowman to hunt down the Ascension group.

Brooks is later shown in "WMD" with Jason Hudson, Grigori Weaver, and Bruce Harris infiltrating a Soviet Union base in 1968. Later on, the squad splits up, with Hudson and Weaver rappelling through a window while Brooks and Harris exits via the door down to the other walkway. As Hudson is exiting through a doorway, Brooks and a Russian soldier are struggling on the walkway, before Brooks gets the upper hand throwing him off the side to his death.

Later in the mission, Harris is presumably killed after falling from a walkway as the squad are forced to escape an avalanche. They discover that Nova-6 has been weaponized and targets are marked across the United States of America; the base is also rigged to explode. After the explosion, the mountain collapses on itself and Brooks, Hudson and Weaver make it out in time.

He is heard in "Redemption" while Mason and Hudson are protecting Yankee squad from the Soviet Armed Forces. He does not however make a physical appearance in this level.

His username to log into the terminal is "TBROOKS" and the password is "LAUREN", which is his wife's name. He is having an affair with Dr. Adrienne Smith as noted in several e-mails. 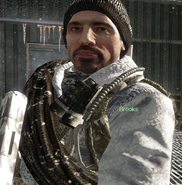 Brooks disguised as a Soviet soldier in "Executive Order".

Brooks in the “Digital Hide” outfit