The Tharsis Shipyard is a large SDF shipyard located in the orbit of Mars. The station serves as a major SDF forward operating base and shipyard.

Following the events of Operation Black Flag, the UNSA manage to hijack the Olympus Mons and managed to use it to get close to the shipyard, where they managed to destroy many oncoming ships. However, it was eventually shot down on Mars. Survivors of the crash proceeded to push to a space elevator, using it to reach the shipyard. There, Nick Reyes and E3N "Ethan" stay aboard the shipyard and orders the others to escape while they destroy the station. In the end, Reyes and Ethan are successful in destroying the station and all the SDF warships docked there, but at the cost of their lives.

In the end, only four members of the Retribution survived following the operation to destroy the shipyard.

The map Skydock takes place at the Tharsis Shipyard. 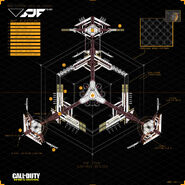 Add a photo to this gallery
Retrieved from "https://callofduty.fandom.com/wiki/Tharsis_Shipyard?oldid=2571744"
Community content is available under CC-BY-SA unless otherwise noted.