The Battle of Verdansk

The Battle of Verdansk is a playlist event featured in Call of Duty: Warzone which served as a reveal event for Call of Duty: Vanguard. Unlike previous events, this event was strictly PvE with all the players working together to achieve the objective. The event was available between August 19th and August 23rd, 2021.

Taking place on the western part of Verdansk, the event featured up to 32 players. Once a match started, the players were tasked to reach the tunnel north of the Verdansk Hospital and plant a TNT charge, one per squad. After a minute, a German armored train spawned from the south and entered the tunnel. The explosion slowed down the train allowing players to attack it and follow it along the tracks.

Every player spawned with either a AK-47, FARA 83 or C58 as their primary weapon and a RPG-7 as their secondary. Each player also had a Munitions Box Field Upgrade. Other weapons could also be encountered as in supply boxes or loadout drops that would spawn ahead of the train, both could include heavy weaponry such as the MGL-32 Grenade Launcher or the Minigun. If a player is far away from the train, they are given an Overdrive bonus allowing them to run faster until they get close to the train.

Once the train proceeded through Bloc 17, turrets were firing explosive rounds dealing more damage against the players. After the train reached the Storage Town, a large amount of Cluster Strikes were launched against the players. The armored train would stop at the gas station located in front of the Junkyard, allowing players to regroup.

After the player destroyed the locomotive, an Allied Operator warned the players that something was coming their way followed by a short cutscene featuring dozens of bombers. The players were tasked to reach an exfil point in the vicinity as the bombers flew above Verdansk dropping bombs. Once the player reached an exfil station, they were asked to wait only to be killed by one of the explosion. The reveal trailer for Call of Duty: Vanguard would play shortly after.

Others rewards were also available depending on the total damage inflicted to the train by the player and their squad.

All rewards were available in both Warzone and Call of Duty: Black Ops Cold War. 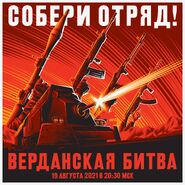 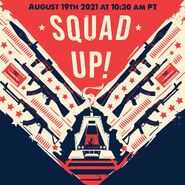 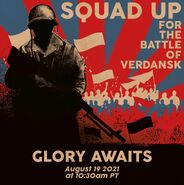 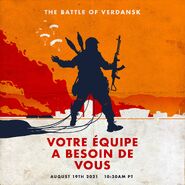