Survive against the limitless waves of the undead.
Obtain the final piece of the Soul Key.

The Beast from Beyond is the fifth and final Zombies map in Call of Duty: Infinite Warfare and part of the Retribution map pack, released on PS4 on September 12, 2017. This map features the Cryptids from Call of Duty Ghosts' Extinction mode.[1]

"The Beast from Beyond, the final chapter of the five-part Call of Duty: Infinite Warfare zombies experience, features the return of Willard Wyler, the enigmatic movie director villain portrayed with voice and likeness by Paul Reubens (Pee-wee’s Big Holiday, Gotham). Wyler once again has trapped the four protagonists inside an all-new horror film, now set in a desolate military station on a distant ice planet. As players begin to discover more and more infected crew members, they’ll need to battle hordes of the undead to uncover the truth and escape Wyler’s films once and for all. The Beast from Beyond also features new weapons, traps and more, in addition to the hallmark Call of Duty action, with Seth Green (Robot Chicken, Austin Powers) as “Poindexter;” Ike Barinholtz (Neighbors, Suicide Squad) as “AJ;” Jay Pharoah (White Famous, Saturday Night Live) as “Andre;” and Sasheer Zamata (Saturday Night Live, Inside Amy Schumer) as “Sally,” all making a return from the ongoing story."
— Official Description

The Beast from the Beyond is set at two distinguishing locations. The first is located within the film, at an abandoned military facility on a distant planet far in the future. The second is set within Wyler's theater and its surrounding alleyways in the ruined New York City in the present time.

Unlike the other maps, the Zombies will not begin to spawn until N31L's head has been installed into the mainframe. Until that is achieved, the players will be attacked by the Cryptids. The player is also given the OSA as the starting weapon instead of the Kendall 44.

The map features the Entangler weapon that plays a very specific role during the Main Quest. The Venom-X also returns from the Extinction.

The players spawn together on a raised platform in Staging. The room features the Oni and Stallion .44 on the wall, both of which cost 750 points. There are two doors in the room that branch off to different paths. The door to the left of Up 'N Atoms, which costs 750 points, will bring the player to the Water Treatment plant. The other door, which is near the computer terminal that the player inserts N31L's head into, also costs 750 points and brings the player through the Mess Hall and into a hallway that has more doors. A portal to Wyler's theater can be found directly above the Magic Wheel in the room, which is to the right of the Oni.

The room also contains a special monitor above the Stallion .44, which shows the current location of the Magic Wheel inside the base.

The Mess Hall is a relatively small room. The room has an Erad wallbuy on a table for 1250 points and the Fridge Lure Trap, which costs 750 points to activate. A non-rebuildable window can be found to the right of the trap and directly across from the window is an open doorway to the Hallway.

Inside the Hallway is a Magic Wheel location, the Proteus, which is available for 1250 points, the door to the Cargo Bay, which also costs for 1250 points and a door that leads outside for 2000 points. A staircase next to the Proteus takes the player up a level and leads to a 1250 point doorway that heads to the Ops Center.

Above the Magic Wheel in the Hallway to the right is a fuse box, which when shot or meleed, will reveal two uncharged Alien Fuses.

The Water Treatment plant is a room that has the whole floor covered with a small layer of water. Because of this, the player cannot slide or go into prone while standing in the water. On the wall in the room is a Karma-45 wallbuy and the Electrocution Trap for 750 points, with the switches being found inside the room and in the hallway connecting the Staging to the plant. To the right of the activation switch on the staircase inside the room is a 1000 point door that leads to the Medical Bay.

Opening the 1000 point door in the Water Treatment plant will bring the player to the lower level of the Medical Bay, where Blue Bolts and a piece for the bridge to the Pack-a-Punch Machine is location leaning to the right of Blue Bolts. Going up the stairs will bring the player to the first part of the Medical Bay, where a dead Cryptid is tied onto a table and a 750 point door to the Ops Center is found. The second part of the Medical Bay blocked off by two forcefields, which can be disabled by launching an astronaut helmet at one of the terminals within the forcefield room with the use of the Entangler.

The Ops Center is one of the largest rooms of the map. The room connects the Staging, Medical Bay, Hallway and Exterior together. Directly in front of the doorway to the Medical Bay is a large hole surrounded by debris. On the debris is the DCM-8, which can be bought for 1250 points. Within the hole is a green ledge while at the bottom is several sharp pieces of rebar, which will instantly kill the player if they land on it. Jumping onto the green ledge will bring the player into a small cave which contains Tuff 'Nuff. At the end of the tunnel brings the player onto a catwalk above the Water Treatment plant, where N31L's head can be found in the bottom left corner of the window at the end of the catwalk. There are also two breaches on the railings of the catwalk, allowing the player to drop back into the Water Treatment plant.

To the left of the debris and hole is a staircase that leads to the 1250 point doorway that heads to the Hallway. There is also a small catwalk section of this room that contains Bang Bangs next to the doorway to the Hallway, a small pathway that brings the player back to Staging, and the EBR-800 wallbuy for 1250 points can be found on a wall alongside the catwalk.

The other part of the room contains a container near the center of the room, which has the R3K wallbuy for 1500 points leaning against it, Bombstoppers, a Magic Wheel location, a 1250 point door to the right of the Magic Wheel that leads the player to a small hallway which contains a portal to Wyler's theater, the second doorway blocked off by a forcefield that leads into the second part of the Medical Bay and the Laser Grid Trap for 750 points.

To the left of Bombstoppers is another staircase which brings the player to a small control room, which is used to later obtain the Venom-X. There is also another 2000 point doorway within the control room which leads outside.

Within the Projector Room is a computer when N31L's head goes during the main easter egg. There is also a new slot in-between the two film reels on the projector, which is where the film reel for Zombies in Spaceland is inserted.

The Cargo Bay can be accessed from the 1250 point door to the right of the Proteus in the Hallway. The whole room is a giant square with different levels. When first entering the room, there is a P-LAW wallbuy for 1000 points to the right of the door and a button to the left which is used to open the portal to Wyler's theater, but can only be activated once N31L's head is installed into the terminal in Staging. At the lowest level of the Cargo Bay is where the Entangler spawns once the player has obtained the second skull for Skullbreaker, as well as Trail Blazers and another piece for the bridge to Pack-a-Punch tucked in-between the staircase leading up a level and a container. On the level below the doorway leading to the Hallway is another Magic Wheel location, as well as an X-Eon wallbuy for 1500 points on the side of a container. On the other side of the room is another staircase which leads to the portal to Wyler's theater.

In the East Alley is a portal which when approached will activate and link to the spawn room, the M.2187 wallbuy for 1250 points and Racin' Stripes in the corner of the alley next to the 1250 point door that connects the alleyway with the main part of the theater.

Inside the main part of the theater is a hallway that brings the player to two different parts of the theater. Going left at the intersection after the cardboard cutouts of a Brute and Sasquatch will bring the player to a small bathroom which has 1250 point door which heads to the West Alley containing Mule Munchies and going right at the intersection will bring the player into the real world Afterlife Arcade, which contains a Magic Wheel location, Skullbreaker, the withdrawl part of the Bank and the Fate and Fortune Dealer. To the left of the dealer on the counter is a film reel for Zombies in Spaceland, which is used to help charge the Alien Fuses. There is also a 1500 point door that leads outside of the theater.

Outside of the theater is the Main Street, which contains a KBS Longbow wallbuy on the side of a dumpster for 1000 points, Deadeye Dewdrops, a Magic Wheel location and another way to the West Alley that contains Mule Munchies across from Deadeye Dewdrops. The deposit part of the Bank is located at the Ticket Booth at the entrance to the theater. The last part for the bridge to Pack-a-Punch can be found crushing a car to the right of a portal. Going up to the portal will turn it on, connecting it to the hallway containing the Laser Grid Trap in the Ops Center. 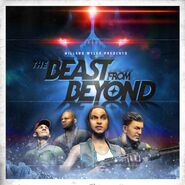 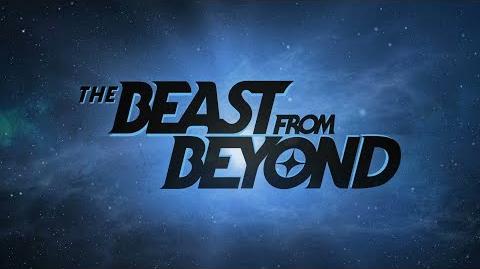 Official Call of Duty® Infinite Warfare - The Beast from Beyond Trailer