"Crossroads" is the tenth campaign mission in Call of Duty 3.

The player sees a cutscene with a squad of German soldiers pinned down. They call for radio support, and the commanding officer orders one of his men to go somewhere, and just as he gets up, he is shot in the head by an American soldier. It is speculated this is Nichols, but there is no proof supporting this theory. This cutscene was probably made so that it would show how the Germans are already losing the war. After the cutscene, Nichols is running along a dirt road with many friendlies. Dixon shouts "COVER, TAKE COVER!" The Americans are receiving a lot of mortar fire, and the player witnesses a few friendlies getting killed by the mortars. The player runs into a cellar of a nearby house with Dixon, Guzzo, and an unknown soldier. A mortar hits the entrance and it gets blocked. Guzzo says, "There goes our exit". Dixon asks, "Anybody got any flares?" and Guzzo lights one and says, "Never figured I'd buy it from our own bombs." Dixon replies, "Yeah, they don't call it friendly fire for nothing." More mortars hit the house and the flare's light went out, causing Guzzo to yell, "Aw crap." Friendly soldiers open up the cellar doors and Dixon says "Nice timing!" The squad along with some other friendlies then moves on along the dirt road behind a friendly Sherman tank. The tank gets hit by a Panzerschreck, but doesn't explode. The tank returns fire. The tank moves forward a bit and gets hit again, exploding.

There are two Germans on the second floor, where the soldier with the Panzerschreck was standing. Take these guys out. Now, shoot the two other Germans in the building right in front of The player. The player and his/her squad should then move into the building and fire at the remaining Germans in the yard. There are Germans by the windows; shoot them. The player could lob a few grenades at the Germans on the yard; it should take out a few. Remember to cook the grenades. There are some Germans right next to the player to the right in the same building. They're by the haystacks. Take them out so the player can shoot the rest in the yard. If the player wants, he/she can go through the door where the Germans were and flank the other Germans in the yard. Just shoot everybody carefully, especially on Hard difficulty. After the player has taken out the enemies, regroup with their squad. Dixon will kick the door down; Dixon and Guzzo will shoot a German above, unless the player shoots him first. Two friendlies will spawn behind the player and follow their squad. Keep advancing. There are Germans in front of the player and to their right; take out the two on the right first. There's an MG which is firing at the players squad to the left. The player can take him out, but remember to use the M1 Garand, as it takes the MG out almost instantly. Take cover, too. Guzzo should shout, "They're falling back!" and the Germans will fall back a bit. Move up a bit and take them out with a grenade. Move up. The player should see two Germans above them by the tree; kill them quickly. The player see two more to the right by the stairs; take them out. After that, the player will see a German and a friendly in a fight in a distance in the burning building. The player can't interfere; it will just give them the "Friendly Fire" message. They will fall down while fighting. Anyway, they can see another fight when taking out the Germans right before he/she goes to the street. The player will see a lone friendly on their mini map. He's fighting a German. He just beats up the German with his rifle and kills him. He will then disappear, and so does his friendly icon from the minimap.

Now that the player is on the street, Guzzo and Dixon take the left path, and the player has to clear the buildings. This is scripted because the player will engage a German in a melee fight, as they exchange hard punches to the face, the German will eventually push you down, out the window and onto the street about to finish you with a Knife, when, Nichols (the player) will cook the grenade on his chest, and shove him back to the building, where he dies. The player must now regroup with his/her squad. The player will see a friendly squad pinned down by German MGs and it's his/her job to take the MG gunners out. There are three Germans inside the building; take them out by a grenade. Guzzo yells, Move it, which means the player has to go to the second floor. A German will lock the doors, but he/she can still shoot rounds at him, but he won't die. Instead, the player will hear him scream right after he had closed the doors, which implies he died. There is no way to get to the second floor, he will always lock the doors. Guzzo says "Blocked. Got to find another way." or, "Look for another way out." and then the player sees a German behind a wall to the left. Take him out and go inside the room. There are three Germans in this room. Take them out quickly, and get to the other end of the room. The same Germans are grenadiers will start lobbing grenades at the player and his/her squad, but the player is safe from the grenades at this point. Just stick with the Thompson and take them out. After the player has taken them out, Dixon yells, "Second floor, go!"

A German will open the door and throw a smoke grenade downstairs; there are three Germans there. Just take them out all with the Thompson. The squad will then regroup. Dixon gets hit and two other friendlies die at the same time. An unknown friendly on the ground yells, "Hold them off! Use that Kraut machine gun if you have to!!" Shoot the gas barrels next to the half-track, and this will take out some enemies. Shoot everything that moves and the half-track should move a bit. Do this again, and the half-track will move a bit again. The player will see Huxley destroy the half-track with a Bazooka. He's in the other building. He might also kills some friendlies near the half-track, which is weird. The medic patches up Dixon's arm. The medic says, "Really should get you to a field hospital". But Dixon replies, "Fat chance at that Doc. Thanks. Gear up, we're heading out!" Huxley will now join the players squad. The player can help out another friendly squad to his/her left. This is completely optional and has no effect.

The squad will regroup. The building receives some machine gun fire from fighters. Guzzo says, "Friggin' Krauts have our guns", and Dixon replies, "Not for long they don't" Dixon will then explain what the player must do next: Here's the situation, we're gonna try a pincer move here. One team will advance through those houses. Another team will advance up that street. Team three goes through that yard there. Nichols, you take point." Right after that, the player will see a friendly fighter chasing a German fighter, and the German fighter crashes. Now, taking the middle route isn't much of a headache, so if the player just sprints to the broken car near the end, and lay down behind it, the Germans will move up right past the player, they won't see the player instantly, so he/she can shoot a couple in the back. There's a danger in this though. On the right path, there are some Germans inside the building in front of the player. Just use grenades. Other friendlies will clear the other routes. Now, when the player has reached the gun position. Shoot the three Germans by the guns, and watch how Dixon throws in a grenade. Boom. Follow the squad again. Dixon will yell, "Fire in the hole" and he will throw a grenade at a pile of crates. Get inside. The player will see two Germans behind the broken wall; take them out. Follow the path, and the player will see a German soldier behind some barrels. Take him out. Follow the path and get upstairs. The player will encounter three Germans in the room. Take them out. There are more Germans on the other side of road, inside the building in front of the player. The player will get more friendlies and a Sherman tank appears in the left. German tanks will also appear a distance away. The M1 Garand is the player's best friend here. There really is no great danger to the player now, he/she can also get to the second floor and shoot from there. There are some Panzerschreck gunners a distance away in the open; take them out if you want. Soon, the player will start to hear planes. The Sherman will take out the German tanks. Guzzo says, "They're bugging out" and Dixon yells, "They're retreating!" Another Sherman tank appears. An unknown friendly says, "And stay out!!" Dixon says "Alright, good work", which leads to the cutscene. Guzzo tells Dixon that Battalion was on the radio. Dixon answers it and then he gives Huxley, Guzzo, the player, and two friendlies Good and bad news. As he tells them good news, two flashbacks of one of the previous mission where the Canucks had taken the Laison River and while the Polish in the begining of this mission who might have moved into Vimoutiers in the North. Jerry was boxed up for the axis in fallling back to Chambois. Major Holden will give Nichols new orders. Chambois is the next destination, much to Dixon's advise to the bad news. Guzzo, Huxley, Nichols, and two friendlies were upset about Chambois, thinking that will be a dangerous mission. Anyways, the mission has been accomplished. 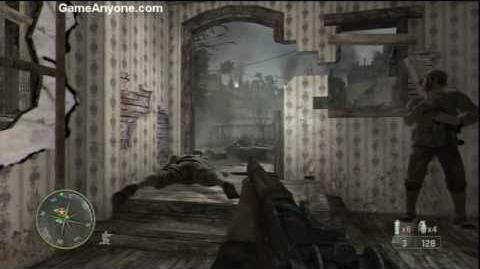 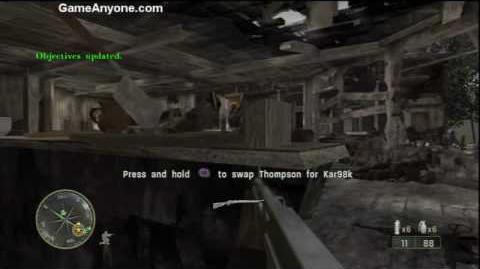 Call of Duty 3 HD - The Crossroads 2 2
The Crossroads walkthrough part two
Add a photo to this gallery
Retrieved from "https://callofduty.fandom.com/wiki/The_Crossroads_(Call_of_Duty_3)?oldid=2510176"
Community content is available under CC-BY-SA unless otherwise noted.