View source
watch 02:10
Call Of Duty: WWII Nazi Zombies - The Darkest Shore Trailer
Do you like this video?
Play Sound

Survive against the limitless waves of the undead.
Recover the pommel of the Sword of Barbarossa. (primary objective)
Destroy and escape the island. (secondary objective)

"A sea fortress and keystone to the power of the Nazi Kriegsmarine, this mist-shrouded island hides secrets both ancient and terrifying."
— Mission Briefing

The Darkest Shore is the third Nazi Zombies map in Call of Duty: WWII. It is part of the game's first DLC, The Resistance.

The Darkest Shore is a medium-sized map, ranging from cliffside bunkers to an underground sub pen. The map features many returning features, as well as new features such as the Minecart system, a new wonder weapon, and the introduction of a new enemy, the Meuchler, a deadly combination of the Bomber and Wüstling.

Players will spawn on the beach, which is being assaulted by a large swarm of zombies. The player must kill all of the attacking zombies by any means necessary. There are several things in this area that can help the player, such as two turreted MG 42s which the player can use against the swarm. Once the swarm is killed, Wave 1 will begin.

This area of the map is relatively small, acting as a connector between the Beach and the Bluffs. Within this room is the Sawed-off Shotgun weapon locker, which can be bought for 500 Jolts. At the top of the staircase is the door leading to the Bluffs, costing 1000 Jolts.

The Bluffs connects a large portion of the map together. Immediately coming from the Beach Passage, the player will be in a small room. In this room is a Geistchild machine, the Type 100 weapon locker for 750 Jolts, and a door leading into the U-Boat Pens for 1500 Jolts. There is also a Mystery Box located here as well.

Continuing along the Bluffs, the player will reach another opening, which contains a door leading to the Bunkers. On this pathway is the SVT-40 weapon locker, which can be bought for 750 Jolts. Unlike most of the other doors in the map, this is one of a few which can only be opened once the main power switch is activated.

Advancing further down the Bluffs is a small overlook area, containing Schildblitz, the Waffe 28 for 1000 Jolts and a door leading to Bunker 3 for 1000 Jolts.

The Bunkers is a small outside area that connects Bunker 1, the Bluffs, and the Overlook together. Within this area is the Combat Shotgun weapon locker for 1000 points, which is located near the Bluffs entrance. The M1 Garand is also in this area, to the right of the doorway leading to Bunker 1. Laufenblitz is also found here as well, next to the doorway leading to the Overlook, which costs 1250 Jolts to open.

Within this area as well are several Flak Guns, which the player can use to defend against the Stukas during the easter egg.

The Overlook is the area between the Bunkers and the Artillery Bunker. Within this area is the inital Mystery Box location, as well as the STG44 and M1941 weapon lockers, both costing 1500 Jolts. There is also a couple Flak Guns the player can use as part of the easter egg. There are also two separate doors that lead into the Artillery Bunker, both costing 1500 Jolts.

The Artillery Bunker contains a few things of interest to the player. Within the room contains a large cannon, which the player can use during the easter egg. There is also Faustblitz near the cannon, as well as the FG 42 for 1600 Jolts. In the bunker area is the BAR for 1500 Jolts, another Geistchild machine, and one of the two power switches in the map. Within this area is where the handle for the Ripsaw is located, being situated in three locations around the bunker. There is also a switch for the Spike Trap located near the power switch within the bunker, the other being directly outside of the bunker, on a wall between the bunker and a Flak Cannon.

Bunker 1 is a small area that contains a couple things for the player. It can be accessed from the 1250 Jolts door in the Bunkers or the 1250 Jolts door coming up from Bunker 3. Within this area is the Bunker 1 exit for the mine system, the Lee Enfield weapon locker, which can be bought for 1600 Jolts, and Kugelblitz.

Bunker 3 houses a couple of important items for the player. Within this area is the sawblade part for the Ripsaw, which is situated on top of a corpse, the MP-40 weapon locker for 1000 Jolts, and the Ubersprengen, which can be unlocked once the player has turned on both power switches and has obtained all three Elektroschnalle from the mines.

The U-Boat Pens houses the main power switch of the map, which is located in the hallway connecting the main pen area with the Bluffs and Bunker 3. In this hallway is Schnellblitz, another Geistchild machine, and the assembly station for the Ripsaw.

Inside the main sub pen are a few things for the player, such as the U-Boat Pens exit for the mines, the M1928 weapon locker for 1000 Jolts and the Propeller Trap for 1000 Jolts as well. There is also a Corpse Gate featured in the room, which when opened, will give the players access to the "Freezer" a room where Straub houses his creations.

This area of the map can only be accessed by riding the minecart, which can be found and called to either the Beach, Bunker 1, or the U-Boat Pens. In this area are the three Elektroschnalle, which are situated between the three destinations, as well as the PPSh-41 weapon locker for 1000 Jolts, being located within the U-Boat Pens tunnel. Bombers also frequently spawn in this area when first riding the minecart. In the tunnels is also the entrance to the secret chamber that houses the pommel of the Sword of Barbarossa. To access this, the player must allow a Bomber to blow open a hole in the side of a wall on the junction track between Bunker 1 and the Beach. 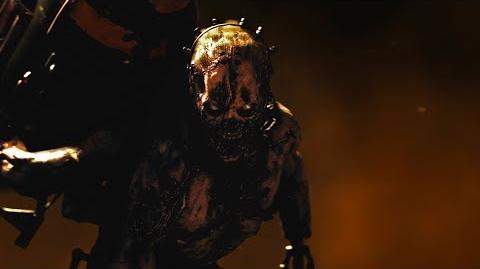