The 3 Intel documentation collected from The Defector provides detail and back-story to the Tet Offensive, war-crimes committed by communist forces, suspected Soviet operations in Vietnam and Joseph Bowman.

1. Since the end of the Tet Offensive, dozens of mass graves have been unearthed in and around the borders of Hue City. Initial estimates number upwards of 5,000 civilian and P.O.W. corpses who were found bound, tortured and in some cases seemingly buried alive. These discoveries confirm rampant hearsay after U.S Marine and the South Vietnamese elite Black Panther Company secured the Hue Citadel on 24 Feb 1968. Full analysis can be found in (TAB A).

2. Analysis of the Test Offensive shows traditional Communist motivations along the lines of igniting uprisings among the populace in order to topple the Saigon-based Republic of (South) Vietnam in the hope of ending the war in a singular country-wide invasion. Despite the North and South Vietnamese agreement on a 2-day cease fire in the honour of the Tet Nguyen Dan holiday, the Vietcong launched their attacks on the morning of 31 Jan 1968 within the borders of South Vietnam.

2a. Within 24 hours, N.V.A had joined the battle in full force and fighting spread to a countrywide scale with more than 80,000 N.V.A troops assaulting over 100 municipalities (TAB B).

2b. Between the Battle of Khe Sanh, Hue and Saigon (amongst scattered in country fighting), U.S troops suffered 543 K.I.A and over 2,500 wounded (this is the highest U.S. casualty rate for a single week since the inception of the war). For details on the full effects of the Tet Offensive, see D.o.D reports in (TAB C).

3. Field reports based off HUMINT and Vietcong documentation, captured during and after the siege of Hue City, validate early reports of a V.C and N.V.A –coordinated massacre of ARVN soldiers, civil servants, political party members, religious leaders, as well as American and other foreign civilians. This was clearly a large scale cleansing of an entire social stratum, focused predominantly on anyone friendly or associated with American forces within the country.

4. It appears the massacre was executed in 3 phases:

4a. Phase One: Kangaroo Courts were set up specifically for local A.R.V.N officials. These trials lasted no longer than 10 minutes and the accused were always found guilty of crimes against the people. Summary executions were immediate.

4b. Phase Two: A system of social reconstruction took place along the Maoist Doctrine in order to build what has been cited as a “new social order”. Those dubbed “counter-revolutionaries” (i.e. Catholics, intellectuals, prominent businessmen and other “imperialist dogs” were targeted and fell to summary executions.

4c. Phase Three: In the days leading up to the reacquisition of the city into Allied control, the order was given to leave no witnesses behind. Any person or group who could identify Vietcong individuals as taking part in the Hue City occupation was to be killed and their body hidden.

4d. Eyewitness accounts can be found in (TAB D)

We acquired the following dossier (TAB A) from our contacts in North Vietnam. The information inside is incomplete but it shows that the Soviets are indeed present in Vietnam. The dossier highlights a program qualified as Project NOVA. Early analysis suggests this to be a new Soviet Weapons program.

Relevant Agency assets operating within Soviet borders were contacted to confirm this theory, but not one was able to verify the existence of this "Project NOVA" let alone uncover its purpose. Our inability to confirm this project's existence via HUMINT suggests a highly classified program on par with the Soviet's recent experiments with cobalt and salted bombs.

Of particular interest is the fact that this program is being spear-headed by individuals familiar to the Agency, including one man thought to be dead: MAJOR GENERAL NIKITA DRAGOVICH. The dossier also states that COLONEL LEV KRAVCHENKO is involved with Project NOVA and may be operating alongside troops within Laos and Vietnam working on said project in unknown capacity. These individual's roles are not specific within the attached dossier but considering the known history of Dragovich's involvement in weapons developement, it can be surmised that he is acting in a leadership capacity.

I will keep you updated as further information becomes available.

Following the footsteps of his WW2 veteran father, the candidate enlisted in the US Navy at the age of 17 and showed a resilience and drive that put his recruit-mates to shame. Immediately following completion of boot camp, the candidate requested and was selected to attend the Underwater Demolition Team (UDT) School.

Despite skepticism from the recruiters over his physical sustainability (given his relatively short stature and a family history of asthma), Bowman passed the arduous qualification training with record results.

Bowman is an excellent marksman, fluent in Spanish and an expert in demolition techniques. 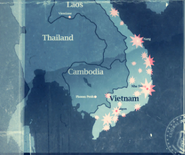 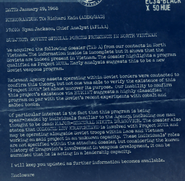 Full intel document.
Add a photo to this gallery

Intel No. 3
Add a photo to this gallery
Retrieved from "https://callofduty.fandom.com/wiki/The_Defector/Intel?oldid=2323994"
Community content is available under CC-BY-SA unless otherwise noted.