"At the height of the TET offensive, enter the MACV building and secure vital intelligence on Soviet plans for the region."
— Briefing

"The Defector" is the sixth campaign mission in Call of Duty: Black Ops.

Hue City has been overrun

Mason starts off in a UH-1 Iroquois helicopter callsign Hotel Six. As Mason's team, callsign X-Ray, rappels onto the roof of the MACV compound in Hue, Hotel Six is taken down by an NVA ZSU. Woods and Mason then crash into a window in the compound, and, while Mason is on the ground, Woods eliminates three enemy soldiers, then throws the fallen Vietnamese troopers' SPAS-12 to Mason, which can use his Dragon's Breath rounds.

Receiving assistance from friendly helicopters, machine gun rain fire through windows quickly eliminating any enemies caught in the fire. Intensity is high, and mixing in civilians throughout the building requires quick thoughts and reactions by the player to minimize their casualties. Bowman, Woods, and Mason then quickly clear out the building attempting to find the defector. After Mason breaches a door, he finds that the defector is, to Mason's surprise, Viktor Reznov, and he informs Mason that Dragovich is planning an attack on the West, presumably the U.S.

"American soldiers! Put down your weapons! This is not your war! We wish you no harm. The People's Army of Vietnam is here to liberate you!"
— Once the player has made his way into the urban streets, a Vietnamese soldier can be heard over a loudspeaker system

Outside, Mason and the rest of his team approaches a group of soldiers and takes over their radio transmitters. Requesting assistance from the sky, he is then tasked with the job of designating buildings to be fired upon by the helicopters. While fighting through the streets, the player is able to provide reconnaissance to the helicopter callsign RT Texas, who soften enemy resistance. Later on in the level, the player is tasked with escorting an APC named "Bottom Feeder" through the city streets. After the APC moves a few blocks, it is destroyed by NVA armor. The player then calls in an attack on the tank blowing it to pieces. They then proceed to escape the city. Before they leave, they hold off NVA soldiers and a T-55 from a landing zone, which they intend to leave from, but can't as the helicopters are under heavy fire. Then, Mason calls in a bombing run, forcing the remaining SOG operators to leave via boat, barely escaping the massive explosion caused by the bombing run. 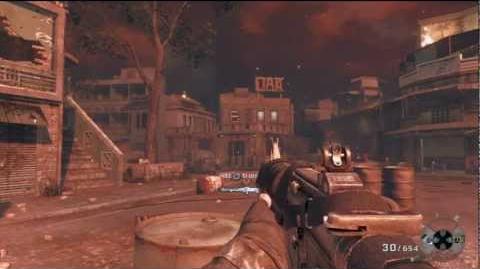 Woods about to disarm the NVA Soldier.

Woods getting rid of the hostiles.

Woods and Mason getting ready to move round the building.

Bottom feeder, the APC that is to be defended to help the Marines.

Woods fighting his way through the streets.

Got away just in time.

Intel unlockable in the mission.
Add a photo to this gallery

Retrieved from "https://callofduty.fandom.com/wiki/The_Defector?oldid=2395490"
Community content is available under CC-BY-SA unless otherwise noted.