Call of Duty Wiki
Register
Don't have an account?
Sign In
Advertisement
in: Call of Duty: Warzone In-game Events

The Destruction of Verdansk

"This is the End."
— Description for The Destruction of Verdansk, Part 1

"Launch the nuke. Destroy Verdansk. Save the world"
— Description for The Destruction of Verdansk, Part 2

The Destruction of Verdansk was an event that began within Call of Duty: Warzone during Season Two of Call of Duty: Black Ops Cold War content on April 21st, 2021 and finished on April 22nd, 2021.

"Verdansk is past the point of no return. Attempts to contain the outbreak have failed. Going back is not an option. It's every squad for itself in this new limited-time mode. The objective? Survive. Drop in fast - the end is near."
— Message of the Day

The Destruction of Verdansk, Part 1 began on April 21st, 2021 at 12:00 PM PT with the addition of a new playlist to Warzone of the same name, ending at 3:00 PM PT. The playlist featured a brand new mode that played similarly to Zombie Royale from the previous event, Haunting of Verdansk.

Players (up to squads of 4) would spawn into Verdansk and be forced to avoid both the gas, as well as the radiation in various Corruption Zones across points of interest in the map. Players who died would become Zombies, and would be able to kill both enemy human (turning them into Zombies in the process) and Zombie players. The match would last for 10 minutes before the safe area would be reduced to the dam, where any non-infected operators would be ordered to exfiltrate before a nuclear missile would launch, ending the match. A cutscene would then play showcasing Verdansk being nuked.

Players who completed The Destruction of Verdansk, Part 1 were rewarded with a "Containment Protocol" Animated Calling Card.

A nuclear missile is prepared to launch.

The nuke is launched.

Verdansk, moments before being nuked.

"Nuclear fallout engulfs Verdansk. Get a glimpse of what happens next. Drop into Rebirth Island and battle all night in limited-time versions of Resurgence, Mini Royale, and Kingslayer. Search for clues amid the Aftermath."
— Message of the Day

Aftermath: Rebirth Island began on April 21st, 2021 at 2:00 PM PT with the addition of three playlists for Rebirth Island - Rebirth Resurgence Quads, Rebirth Mini Royale Duos, and Rebirth Kingslayer. However, this version of Rebirth Island took place at night and is set 15 minutes after The Destruction of Verdansk, Part 1.

Besides the cosmetic changes (i.e, the new skybox featuring a nuked Verdansk and the night theme to the map), a new point of interest was added to the map - the Control Center that replaces Construction Site. When dropping into the map, Russian letters would appear within the names of the different P.O.I's on the map. When put together, it spelled out a phrase that translated to "Rebirth From Ashes".

On April 21st, 2021 at 9:00 PM PT, when the Warzone Season Three update was released, the three Rebirth Island playlists had a small update. The Rebirth Island and all the cosmetic changes in the map were still present, however the map events now taking place the night before The Destruction of Verdansk Part 1, 24 hours before the Containment Protocol.

Rebirth from the Ashes

"For decades, they honed the darkness, burying truth in shadow. They cast their lies and misinformation upon the masses like a blanket that smothers out all light and hope, starving the people's eyes and hearts of that which frees them. But their own darkness has blinded them. We have waited. We have readied. Think of a single candle, how it can illuminate the darkest room: this is that room. You are that light. Nothing will be left unseen. Nobody will be extinguished. Now begins the path through the dark. Now begins the whatafter."
— ZASHA

Rebirth from the Ashes is a viral website that serves as part of the narrative for The Destruction of Verdansk - storywise, taking place on April 22nd, 2021 at 10:15 AM PT on a network called ZASHA.

"You've made it this far. Now it's time to go a little further. This is where the real work begins. Do you have the codes from the radio towers? We'll get you scanned and verified. We'll try and connect you with the others securely. But the intel I have is unscrubbed. It's raw. Don't say we didn't warn you."
— ZASHA-MOD

Upon entering the website, one would be greeted with an audio message from an individual known only by their ZASHA username of ZASHA-MOD. From there, a panel appeared that allowed codes to be entered in. Some of these codes resulted in images of familiar points of interest within Verdansk in 1984, new areas altogether, and, in one case, an image of a PPSh-41.

However, the main codes had to be gathered from various radio towers across Rebirth Island, utilizing a key to decipher. Each of these codes led to an objective that needed to be completed.

The first objective, unlocked with the code GUARDIAN, led to a "security clearance" that required the website to allow access to a person's webcam. It would then show the feedback on the user's webcam, allowing them to capture a photo at will. Users would then be able to create a customizable and downloadable badge featuring their name, alias, and squad.

The facial scan sequence. Note that if the user does not have a webcam, or has it disabled, it will instead display an animated gas mask.

"We live in a digital world, but disruption has a way of reverting procedures back to analog. This way, when the system comes crashing down, we'll still have a way to communicate. Consider it a badge of honor. It is important not to lose autonomy. We do not want to become what we seek to destroy. There must always be humanity behind the machine."

The second objective, unlocked with the code PARALLAX, led to an interactable polyhedron that had numbers across it's different sides. Using a video posted by Activision on Twitter, users would have to spin the polyhedron around and click *-1-9-8-4-# to match the tones. Afterwards, a video of a group of helicopters flying would play.

Polyhedron Sequence. "Enter the sequence to crack the code. We know you are always listening. But did you actually hear our message? Each side of the polyhedron plays a tone. Follow the bird to find the 6 tones. Get the sequence right and our message will be clear."

The video that plays upon completion of the Polyhedron Sequence.

The third objective, unlocked with the code PARADIGM, led to a panel that could be interacted with by either clicking on a mouse/holding down spacebar on a computer, or tapping rapidly on a mobile device. Occasionally, one would be required to "verify their humanity" by completing a small segment comparable to a CAPTCHA. This occurred three times (the first involving parachutes, the second involving heads featuring D-Day, Ghost, and Rose, and the last featuring a picture of Russell Adler) before leading to an image of a new gulag based off of Standoff.

"A structure built to dispose of us. If you find yourself here, don't forget: their hollow words have built these hollow halls. There is always a way out for those who are strong enough."

The fourth objective, unlocked with the code OBLIVION, led to a panel that required access to the user's location. From there it would showcase a map of the Earth, showcasing the user's location as well as the location of other users. The user would have to select between the different locations to report the correct one - which is Kastovia. 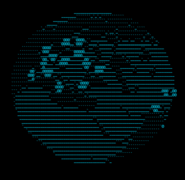 "These locations are deliberately imprecise -- don't want to give our exact positions away. But even randomizing your locales with an extra level of encryption, the effect is clear: Zasha is everywhere. We grew from one citizen band radio, hacked together from old tech. Now we are a network that spans the globe. Across large cities and small towns, we began as one voice. Across large cities and small towns, we remain one voice"

The video that plays when clicking on Kastovia.

After completing each objective, a final code could be entered (ATLANTIS). Upon entering, the user would be given access to a "chatroom" with other operators, a countdown, and another polyhedron which allowed the user to chat with various pre-selected phrases. The phrases, corresponding to the parts of the polyhedron are as follows:

After the countdown ended, a prompt was given to view "Verdansk Ver 8.4", upon which users were able to watch the cinematic trailer for Black Ops Cold War Season Three. Users were also able to download a poster of Verdansk '84. 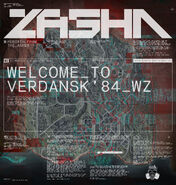 "Intel shows no sign of Adler, but as Stitch goes, so goes his precious cargo. And now the Norwegian and her heavy have entered the fray. Perseus has always been one step ahead, but not for long... Perseus operates in the shadows. But in the light of truth, all of the ghosts of the past will be revealed. The light shines on Yamantau. Find Wraith. Find Stitch. Find Adler."

"End the outbreak. Drop into Rebirth Island in the dead of night with a dire task. Launch the nuke that will destroy Verdansk, wiping out the zombie horde for good. Rally your squad ASAP - this limited-time mode will go up in smoke soon."
— Message of the Day

Chronologically taking place 10 minutes before Part 1, The Destruction of Verdansk, Part 2 took place on the night version of Rebirth Island, pitting squads of up to 4 against each other to hold on to a device that would eventually lead to the arming of a nuclear missile. The nuke would detonate on Verdansk, and a cutscene would play showcasing modern-day Verdansk being nuked, as well as the entire process being reversed as time flashed back to Verdansk during 1984.

All players remaining in the match would then be put into a normal game of Battle Royale within the new Verdansk '84 map.

Verdansk is nuked from Rebirth Island.