View source
watch 01:34
What is The Final Reich?
Do you like this video?
Play Sound

Survive against the limitless waves of the undead.
Recover the hilt of the Sword of Barbarossa. (primary objective)
Save Klaus. (secondary objective)

The Final Reich (also known as Army of the Dead in the leaked trailer) is the second Nazi Zombies map in Call of Duty: WWII. It is the primary map of the base game.

The Final Reich is a large map, with an above ground level, and an underground level.

The players spawn in an alley, with one buyable door and two that require power. Players can purchase the M30 Luftwaffe Drilling or the Machine Pistol for 500 jolts per weapon, or buy Lebenblitz (500 on solo, 1500 on co-op).

There is a barrier between the Village Square and the alley that costs 750 jolts. Here the players can find a gas valve, another power door, as well as a Geistchild machine, the Type 100 and SVT-40, both costing 750 jolts. From the Village Square the player can either go to the Riverside from the back or from the center. There is also a hole in the center of the square that after turning all gas valves, can be opened to get to the sewers and turn on the power. Inside this tunnel to the power generator is a door that leads to the Sewers for 1250 jolts, as well as Laufenblitz.

In the back and center of the Village Square there are doors that cost 1000 jolts that leads to the Riverside. There is an M1928 available for 1000 jolts directly across from the door in the back that costs 1500 jolts. Further back in the Riverside there is another gas valve, right next to the door that leads to the Pub. There is also a small dock that has a 1250 jolt door that leads into the Sewers.

Near the M1928 is a 1500 jolt door that brings the player to the Courtyard. Here, a Mystery Box location is found, as well as the Lee Enfield for 1600 jolts. The S-Mine Trap is also present here for 1000 jolts. There is also a hole in the wall next to the painting used for the casual easter egg, which brings the player into the Laboratory inside the bunker.

The Pub is a small area of the map, between the Village Entrance, Riverside and the Tower. It contains a painting for the casual easter egg, as well as the record player for the hardcore easter egg and Kugelblitz. A hole in the floor of the Pub brings the player to the door that connects the Pub to the Riverside for 1500 jolts. Inside the hole is also the Combat Shotgun for 1000 jolts and another Geistchild machine.

The Tower is a relatively small area of the map. It can be accessed from the door next to the Pub that costs 1500 jolts. On the bridge leading to the Tower is a Mystery Box location. At the tower itself is the Waffe 28, which can be obtained for 1000 jolts, as well as a Disposal Tube that once active will bring the player to the Sewers for 250 jolts. The tower is where the player must defend the lightning rods during both the casual and hardcore easter eggs.

Inside the Command Room is three doors, each costing 1500 jolts, bringing the player to the Laboratory, Morgue and Salt Mine Tunnels respectively. To the left of the door leading to the Morgue is another Disposal Tube, as well as the Grease Gun for 1000 jolts. The Weapon Assembly Station can be found here as well, where the Tesla Gun and its variants can be assembled by the player. Faustblitz can also be found here, as well as the inital Mystery Box location.

Inside the Sewers is also the Saw Trap, which can be activated for 1000 jolts as well.

Following the tunnel downwards will bring the player to the Emperor's Chamber, where the hilt of the Sword of Barbarossa can be found, as well as the Geistkraft Transfer Device, the Right Hand of God, the Left Hand of God and the Voice of God can be found, all of which are part of both versions of the easter egg.

A zombie seen in the trailer.

A close up of a zombie.

Image from the leaked "Army of the Dead" trailer.

The Final Reich from the Prologue intro cutscene. 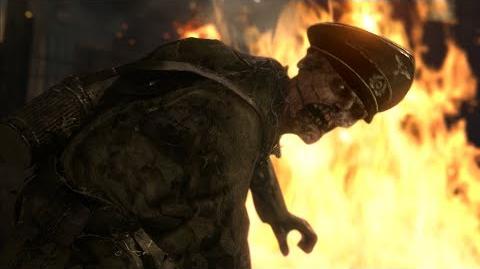 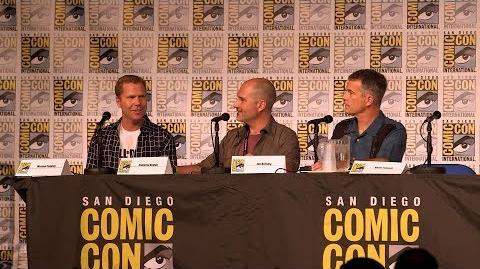