On the map The Final Reich, there are a total of thirteen different recorders the player can pick up within the map, with a single recorder counting for two files. The player can listen or watch any of the files they obtain from the "Recordings" section of the "Dossier" tab under the "Soldier" tab.

Klaus Fischer: Marie, if you are listening to this then you have received my letters. I pray to God that you are ok - and that you come armed with the might of the Allied forces.

Klaus Fischer: I have so much to tell you. So much to say... but most importantly... I... I was wrong. So very wrong. About the Reich, about you, about everything.

Klaus Fischer: After I came home and took over our father's shop, I was angry. Furious. Having to leave my studies at Heidelberg to care for him had been bad enough. But my mentor, my idol, Professor Lenard - the man responsible for the Deutsche Physik! He chose to retire in my absence. My dream of playing a role in the German scientific renaissance - it was dead. I lost hope.

Klaus Fischer: It was a dark time. I know that our fights had turned... ugly. We both said things that we didn't mean. I was convinced that the Nazi party held the brightest future of our people... and you only saw the darkness. You saw more clearly than I did.

Klaus Fischer: Marie, I wept when they found it. When the workers came in from the mine, talking about what they had discovered... this artifact of legend. This was why I was here, this was my purpose. To bring the conqueror's mighty sword to our Führer! My life had meaning again.

Klaus Fischer: It was I who sent a message to the Nazis. My contact at the University put me in touch with Richard Darré - from there, it was only a matter of days before the Ahnenerbe rolled in with a full battalion of troops. I took Dr. Straub down to the chapel myself, showed him the hilt to the Barbarossa's sword. It was like touching a flame to gunpowder.

Klaus Fischer: Straub put Mittelburg on lock down, knowing our little village was the perfect cover. The townspeople were allowed to go about their lives, but they could not leave. Their mail was read, filtered, burnt or rewritten. Those who asked questions were shot. This... this is when I began to doubt my loyalties.

Klaus Fischer: The salt mines were converted into a laboratory. The sword piece - this hilt - would not budge from it's resting place. The head of the troops, Gruppenführer Heinz Richter, would swear up and down the tunnels about this. It was all Doktor Straub could do to keep him from dynamiting the chapel into rubble. Those two... they were a bad combination.

Klaus Fischer: I presented myself to Dr. Straub with all of the zeal and ambition I could muster. I knew that he would see how destiny had placed me at the right place, the right time. I presented him with my papers, some of the research I'd done with Lenard. He... he looked down his nose at me. Said my work was amateur. Poorly documented. But in the end, because I knew the area, he said I might be useful. And like a desperate fool, I was grateful for this. I thanked him.

Klaus Fischer: He knew of our father, Marie. He had heard of how our father's weapon designs had helped the Kasierliche Marine. But he laughed... laughed that the brilliant Heinz Fischer had ended up making toys. I did not care to tell him that father had chosen to make toys as penitence - to bring joy where before his invention had brought only death. I should have listened to father. I should have listened.

Klaus Fischer: They have done horrible things here. Monstrous things. Straub is more twisted than you can imagine, so driven to bring about the Final Reich that nothing else matters to him. He will stop at nothing, Marie.

Klaus Fischer: Straub was obsessed with the Hilt, with the strange physics rooting it to the mountain. Richter just wanted to make it into a weapon. From the very beginning they were at odds. This conflict brought about the ruination of eveything... but also my first glimpse of hope.

Klaus Fischer: You see, Straub's focus was so allencompasing that he missed some critical information - information that was literally all around him. The chapel was more than just a resting place for this piece of the Emperor's legendary sword. It... well, it was like father always told us, Marie - art tells a story. And in the carvings and statues surrounding the Hilt I uncovered a tale I had never expected.

Klaus Fischer: There is more to this than buried treasure. I have uncovered clues to why the sword was taken apart. Why it was hidden. And why it was made so... inaccesable. There are forces at work here that have existed outside of history. Hidden forces. A secret, darker than ever Herr Himmler dares imagine.

Klaus Fischer: Unfortunately, Straub came across a few of my notes on these... possibilities. He flew into a rage, and would only be mollified when I quoted his own words back to him: my work had been amateur, poorly documented. I was looking for more evidence. He went cold and left. It wasn't long after this that he started bringing stolen art into the bunker. You see, he had taken the root of my idea and run with it.

Klaus Fischer: If Straub had chosen to work with me on this, I could have elaborated on why this art may contain the clues we need to unlock the Hilt. But no, Straub sees information as a weapon. He does not entrust it to anybody but himself. This is his greatest weakness.

Klaus Fischer: Marie, I cannot put this more succintly: there are others... other forces aware of the Sword. Of it's powers. And they are actively working to keep it out of our hands.

Klaus Fischer: A secret organization, a cabal dedicated to keeping this hidden. Soldiers, artists, engineers - I don't know how deep this goes. But Straub is now aware of this. You need to be aware as well.

Klaus Fischer: First, look for paintings created by those who would be opposed to the Nazi Party. I have my suspicions that they would be the easiest to recruit into this... effort. Second, my research has led me down paths that extend far beyond Mittelburg. Beyond Germany. Marie, prepare yourself for a journey.

Klaus Fischer: That... that may be all I can share with you. Straub grows more suspicious of me every day. Dear sister, I have spent my time here preparing a way for you to defeat Straub and his evil. I have sabotaged his work. I have hidden weapons and tools that will give you the power to counter the horror that grows beneath the mountain. My hope is that somehow... you can forgive me.

Klaus Fischer: I... I must go into hiding now - I'm about to release Straub's most powerful weapon. I cannot promise that I will survive what happens next, but I pray it will open a way for you to find your way in to this nightmare. And if you do, I have no doubt that you will conquer it. This is your nature. And I will always admire this. I love you, Marie. Auf Wiedersehen.

Peter Straub: The Führer had asked for something exceptional from my staff. A soldier who does not rest. A soldier who does not fear. And a soldier who does not shy away from the shadow of death. I have found that soldier. Or perhaps, it is better to say that I have birthed him. (chuckles) But I am getting ahead of myself. I had begun to lose hope in our ability to find artifacts of significance. But then, Divine Providence. The discovery of a lifetime. The hilt to the legendary sword of the Holy Roman Emperor - Frederick Barbarossa. The embodiment of German nobility. German power. The Ahnenerbe was sent to reclaim the sword piece for Hitler's personal collection. And they could not move it... not with chains, not with tractors, nothing. When the mountain will not come to- (static), I brought everything to the mountain. My tools. My staff. The foremost weapons expert in the Wehrmacht, Gruppenführer Heinz Richter. Little did we know that we were about to uncover something that would change our understanding of the world!

Peter Straub: Even without breaking through the magnetic force surrounding this hilt, we have been able to siphon off vast amounts of energy. And this is where I made my greatest discovery. During one of my early experiments, an attempt to draw power from the hilt, a cable became overheated and snapped. It struck a pair of guards. They were killed instantly. They were dead - and then they were not! I watched as the first soldier began to twitch, violently and then began walking towards me. And the corpse's intent was clear: it meant to kill me. (laughs) Luckily more soldiers had arrived by then and were able to put it down. But, I had seen something astonishing. I had seen death overcome and I had seen a vision of our Führer's future!

Peter Straub: Geistkraft - the name I have given this new form of energy. It can be conducted through the human nervous systems activating the most primitive parts of the human cerebellum. The untoten are preserved by the same energy that drives them. They are machines now, muscles and bones driven by their loyalty to their master. I have found that by triggering the pain receptors on these corpses I can augment the soldier's strength and speed. As someone who has extensively studied the effects of pain, it was inspirational! I have found my purpose here. I am to bring pain to the world.

Peter Straub: I have been betrayed. Klaus has been sabotaging my work all along. He will pay. And that bastard Richter! The man sent to assist my work, to protect my facility? He has been seduced by the power of the weapons we can build with the geistkraft energy! The untoten have broken free. Four... no, five times now. We are so close to mastery here! So close to building an army! And what happens when their tanks come into view? Their mighty war machines? I am building more than just rank and file soldiers! I am building something that will tear through the mightiest steel and knock their fortresses into dust! I have created the devil himself. 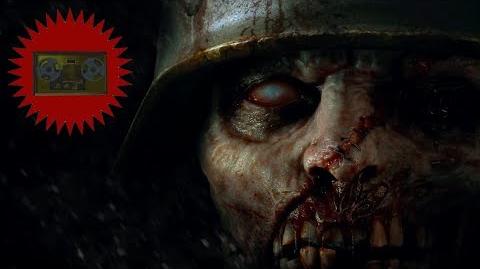