The Flag Must Fall

Dead In Her Sights

The Flag Must Fall is the second mission in Call of Duty: Finest Hour. Taking control of a Russian soldier during the Siege of Stalingrad, the player is engaged with a large amount of German soldiers, who control a large hill with a group of bunkers surrounding it. The objective of the mission is to fight against the hordes of Germans to gain control of the hill.

The player will start the mission exactly where they finished the last. Sgt. Puskov informs the character that they need to clear some buildings before getting to Mamayev Kurgan. The player goes through a door to find several Nazi Soldiers in there. The player must clear them out and head to a window where the character's allies put up an Allied MG42. At this point the player can do nothing as there is a soldier on the gun but he gets shot, and the character is ordered to take over and kill as many Germans as possible. Then in a cutscene, Sgt. Puskov saves the character's life from a sniper dying in the process. Then Lt. Tanya Pavelovna shoots the sniper and orders the character to take the bunkers on the hill, from which she says the Germans use the view to direct artillery.

A sofa will fall down the stairs, clearing the player's way out of the house. It is recommended to take Sgt. Puskov's PPSh-41 as it has a much higher rate of fire and a bigger drum mag than the MP40, making it more effective when clearing trenches. The player's objective is to neutralize 3 bunkers with MG42 nests in them by killing the gunners. Come out of the house and head towards the hill. Russian troops will be following the character around the hill, armed with Mosin-Nagants. It will be useful to take a medkit near what was like a destroyed wall. Often a mortar shell will explode near the character causing the game to play in slow motion for a small period of time. Do not panic. Try to find and get in a trench as quickly as possible, as most open areas are exposed to the fire of the MG42 nests. There will be a lot of troops in the trenches, so keep the character's SMG ready. It is better to head to the right or the left bunker first, as the benefit of any flanking attack is that the character will only have enemies to one side. When in a trench, the star on the player's compass will point where to head and turn to reach the bunker. There will always be a way leading the character behind them, so don't try to attack a MG nest head-on. It is best to clear trenches and bunkers from right to left or the other way round. Once the player has neutralized the 3 nests, the new and the final objective for this level will be to clear a pillbox on top of the hill and take down the Nazi flag in it. Use the trenches to get behind it, where the entrance is. There will be enemies behind cover, much like in the first part of the level. It is a good idea to accurately shoot them when they show up, as attacking may be risky. Pull down the Nazi flag and the mission will end. 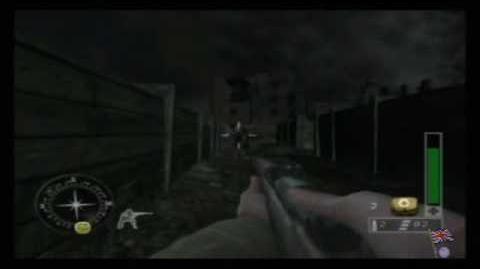 Main article: The Flag Must Fall/Transcript

Retrieved from "https://callofduty.fandom.com/wiki/The_Flag_Must_Fall?oldid=2495664"
Community content is available under CC-BY-SA unless otherwise noted.