Find Rorke.
Jump to the rooftops.
Take out enemy helos.

"Dad taught us many things, but one lesson always stood out... Good men are defined by the choices they make. Logan and I made a choice, a promise. To the fallen Ghosts before us. To dad. We'd fight Rorke and we'd stop him... no matter the cost."
— David "Hesh" Walker, during the opening credits of mission

"The Ghost Killer" is the eighteenth and final campaign mission of Call of Duty: Ghosts. This mission sees Logan and Hesh fight their way through a Federation supply train to kill Rorke, achieve retribution and revenge and end the Federation War. This mission takes place around the same time Icarus Team seizes control of the LOKI Space Station and its kinetic rods, as well as 15 minutes before Icarus Team is ordered by Merrick to fire at the train tracks at the demand of Hesh prior to breaching the engine room with Logan.

Logan and Hesh take down two Federation soldiers and look at a screen on the wall showing a Federation soldier. Rorke then shows himself on the screen and taunts Hesh, prompting the latter to punch the screen, smashing it. Hesh and Logan then proceed to the outside of the train, where they witness LOKI's rods raining down fire upon the Federation. Once Hesh and Logan finally reach the front of the train, the two stand outside the door leading to the engine room where Rorke is, where they prepare to breach it. Before doing so, however, Hesh contacts Merrick and orders him to send a rod down onto the train if he hears the word "Checkmate". While Logan breaches the door, a Federation soldier unintentionally fires a rocket at the train's engine, causing Hesh and Logan to slide forward, sending them straight into the engine room, where Rorke is standing with three Federation soldiers. Logan pushes Rorke down and uses his .44 Magnum to kill two soldiers, while Hesh takes down the third. However, Rorke forces himself back up, headbutts Logan, punches him in the face, grabs his Magnum and holds Logan hostage to Hesh. Rorke orders Hesh to drop his pistol and then shoots him in the arm, wounding Hesh. Rorke then aims his revolver at Hesh's head, but Hesh contacts Merrick with the word "Checkmate". Merrick confirms and fires at the train, forcing a rod to hit the rail in front of the train, sending the train into the ocean and knocking Logan unconscious.

When Logan reawakens, the train is underwater and he sees Rorke's Magnum land between them. They both crawl for it, but Rorke reaches it first. However, before he can finish Logan off, Hesh hits Rorke from behind with a fire extinguisher, making Rorke miss his shot. Hesh then engages Rorke in hand-to-hand combat, while Logan picks up the gun and aims it at Rorke, but finds that it is out of ammo. Hesh manages to toss some bullets to Logan, who catches one and loads it into the Magnum, while Rorke desperately crawls towards him. Hesh grabs Rorke and holds onto him before Logan shoots Rorke. The bullet also goes through Hesh and the window behind them, flooding the engine room. Logan grabs Hesh and they make it to the surface of a beach, where Hesh informs Merrick that Rorke is dead and Merrick calls for extraction. Logan and Hesh witness rods destroying Federation ships, but Rorke suddenly appears from behind and kicks Logan in the face and berates him for ruining his plans. Logan attempts to stab him, but Rorke counters and breaks Logan's arm, and kicks Hesh. Rorke shows admiration for Logan's determination and spirit before dragging Logan away as Hesh helplessly screams for him, because he was too injured and was unable to stop Rorke, even to no avail.

After the endgame credits, Logan is seen stuck in a pit (resembling Rorke's pit from The Hunted opening credits), presumably going through the same torture methods that Rorke went through, with a helicopter flying by during the night, while it rains, shining a spotlight on Logan's position.

Logan and Hesh going after Rorke.

Logan and Hesh after they have escaped the train.

Rorke reappearing after being presumed dead.

Rorke announcing his plans to brainwash Logan, saying that there will be no Ghosts anymore, and tells him that he and Logan are gonna destory the Ghosts together.
Add a photo to this gallery 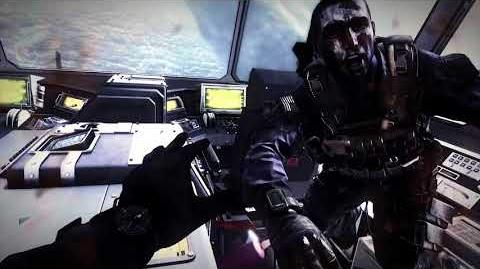 Retrieved from "https://callofduty.fandom.com/wiki/The_Ghost_Killer?oldid=2489596"
Community content is available under CC-BY-SA unless otherwise noted.