Call of Duty Wiki
Register
Don't have an account?
Sign In
in: Call of Duty 2: Big Red One Single Player Levels

Get off the beach and capture the Flak 88

The Great Crusade is the ninth level of Call of Duty 2: Big Red One. In the level, Cpl. Roland Rogers and his squad participate in the D-Day assault of Normandy, France.

The mission starts out with the player and the squad riding towards the beach in a Landing Craft Infantry instead of a Higgins boat. After being briefed, Sgt. Hawkins hands the player a pair binoculars with instructions to use them to call targets on the beach. The player marks enemy bunkers, Flak 88s, and anything else on the shore line. After the targets are destroyed, the LCI is hit by artillery. The player will fade in and out of consciousness. The crew and squad jumps on the life boats. The player is woken up on the beach by Sgt. Hawkins.

The player and the squad make their way up the beach to the main bunker with the aid of a Dozer tank and two US engineers and other friendlies. The player and the squad cover the engineers planting charges on two barricades. After the barricades have been taken out, the Dozer gets destroyed by a Panzerschreck, forcing the player to eliminate the Panzerschreck squad. After reaching the main bunker, Hawkins orders the player to clear out the radio tower and destroy the radio equipment inside. After that, the player and the squad cover the engineers planting a charge on the armored gate. When the gate is destroyed, Hawkins orders the player to find three mortar pits and destroy them. After destroying them, the squad assaults a warehouse. Inside the warehouse, the Germans lower a gate, blocking the squad's movement. The player climbs up a ladder and makes way to the other side of the gate. On the other side, the player locates a switch to raise the gate. After the squad regroups, two friendly engineers place charges on an armored gate near the player.

The gate is destroyed by a FlaK 88 behind it, killing the two engineers. The squad takes out the 88 crew and the Germans defending it. Pvt. Smith destroys the 88. Hawkins orders the squad to form up by a nearby bunker. The squad takes a look at another 88 on the opening. The squad then makes its way to the 88, but they get pinned down by two groups of Germans attacking from the nearby bunkers. Hawkins orders the player to destroy the bunkers with the 88, but Smith says the 88 is busted. Hawkins orders Smith to fix the 88 up while the squad defends the position. The 88 is repaired and the player takes control of it, using it to destroy the two bunkers and after that, the fuel dump. After that, Hawkins debriefs the squad and states how he is proud to serve with the squad. 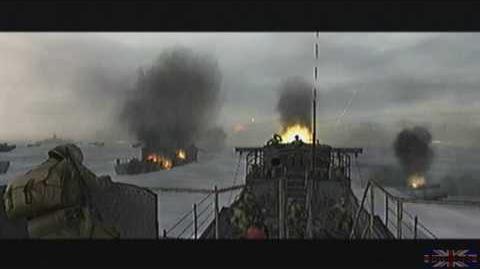