Of Their Own Accord (in-game)
Contingency (chronologically)

Rescue Prisoner #627.
Follow Captain MacTavish into the gulag.
Sweep the cells for the prisoner.
Plant the breaching charge.
Escape the gulag.

For the scrapped multiplayer map, see Gulag.
For the location, see Petropavlovsk Gulag.

"The Gulag" is the tenth mission of Call of Duty: Modern Warfare 2 and Call of Duty: Modern Warfare 2 Campaign Remastered. The player takes the role of Gary "Roach" Sanderson as he, Captain John "Soap" MacTavish, and the rest of Task Force 141 storm the gulag, an old Russian prison, to rescue Prisoner #627. This mission is phase two of "The Only Easy Day... Was Yesterday".

After disabling SAM sites the Russians had placed on oil rigs, Shepherd informs Task Force 141 that the Sixth Fleet is mopping up the area and gives them a brief rundown of the gulag they are about to storm and that they are rescuing "Prisoner 627" - the man Vladimir Makarov despises the most.

The group is ferried on several Little Birds as escort fighters destroy a SAM site near the cliff. The Sixth Fleet then begins to bombard the gulag as the Little Birds begin sniping defenders on the walls. As the men snipe their enemies, a shot from one of the battleships nearly causes the Little Bird Roach is on to suffer an air draft. Soap tells Shepherd to have the navy cease fire, which he is able to do as the Little Birds touch down.

Fighting their way through the gulag, they arrive at a control room where Ghost hacks into the control system while Roach and Soap begin clearing cells. Ghost then tells them that Prisoner 627 was recently moved to the east wing, and that the armory is their best bet to reach them. As the group enters the armory, Ghost soon spots enemies moving in, who the team are able to repulse by cleverly using Riot Shields to draw their fire away.

Rappelling down to the bottom level, the team activates their night vision and engage another group of defenders. Upon clearing the hallway of enemies and making it to the other side, Roach is shell-shocked by continued bombardment. Soap orders Shepherd to have the Navy stand down, which he is again able to do. Clearing more enemies, the team then breaches into a shower room and engage more enemies, fighting their way to the other side.

Now clear of enemies, Ghost soon informs them that there are two heat signatures, one of them being their prisoner. As they breach the wall separating them, the prisoner overwhelms his guard and punches Roach down and aims an AK-47 at him. As Soap yells for the prisoner to stand down, he quickly realizes that the prisoner is Price, who was captured during Operation Kingfish. A bewildered Worm questions the nickname "Soap", which until now was unknown to Task Force 141, when the building shakes, with Shepherd informing them that the Navy has resumed their bombardment. Price and the team try to escape through a passageway, but are cut off by falling debris and are forced to find another route.

They arrive in a cafeteria where an undetonated bomb has crashed through the ceiling. Worried that they have no way to escape, Roach is then struck by falling debris and knocked out. As he comes to, he sees Soap fire a flare, which the Pave Low pilot spots and drops a skyhook. All of the men are able to latch on and escape before the gulag is destroyed.

The player starts the mission on a fast transport helicopter as three Little Birds converge on a Russian Gulag while the F-15 Eagles destroy a SAM (surface-to-air missile) site on a nearby ridge. As the player's Little Bird flies over the gulag, the player can snipe the soldiers on the towers.

After landing, the player will fight in a courtyard filled with enemies.

After that, the player will fight to the shower rooms.

After clearing the shower room, the team will advance to rescue Prisoner 627 that was revealed to be Captain Price, who was captured during the events of Operation Kingfish. MacTavish orders him to drop the weapon and the old friends are reunited.

Then, the player must hurry to reach the exfil point where the cave-in drops on the player. However, Price will free the player and the team will escape from the gulag with a SPIE rig that is attached to a Pave Low.

Old Painting of the Gulag (shown in the loading cutscene). 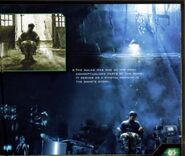 Early concept art of The Gulag.

Task Force 141 begining the assault on the Gulag.

The battle in the shower room. 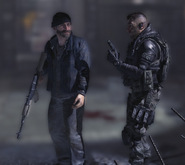 Soap giving Price his M1911 back at the end of the level.

Intel No. 4
Polski
Community content is available under CC-BY-SA unless otherwise noted.
Advertisement