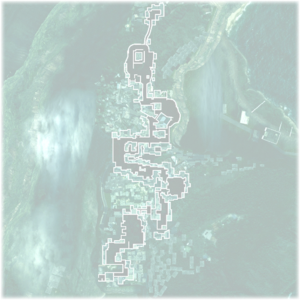 "The Hornet's Nest" is the seventh mission of Call of Duty: Modern Warfare 2 and Call of Duty: Modern Warfare 2 Campaign Remastered. Following the capture and interrogation of Alejandro Rojas, US forces have been banned from entering Brazilian airspace due to the destruction, forcing Captain MacTavish to call for outside help from Nikolai. The player controls Sgt. Gary "Roach" Sanderson as he and Task Force 141 escape the Favela through a market to reach Nikolai's Pave Low.

After torturing Alejandro Rojas, he tells them that the only person that Makarov hates more than Americans is locked up in a gulag. Task Force 141 decides to get the person in the Gulag. Unfortunately, the Militia are pursing them, and due to the Russo-American War, the U.S cannot send a squad to pick up Task Force 141. Therefore, MacTavish calls Nikolai to pick them up. Taking part in intense firefights against the militia, Task Force 141 finally gets to the LZ where Nikolai is waiting for them. Unfortunately, heavy RPG fire forces Nikolai to break away and leave temporarily.

As the Task Force makes their way on the rooftops of the favela, they do a jump. Roach falls short, and MacTavish tries to reach him, but is too late and Roach falls into the militia-ridden streets of the favela. Somehow, through both luck and guidance from Soap when Roach reaches the rooftops, Roach manages to escape and finds Nikolai's Pave Low, and jumps to a ladder. The Task Forces successfully escapes and heads towards a submarine.

Note: This is based on the Veteran difficulty. You do not have to follow the directions below, but it can be helpful later on.

What you should know about:

You start from the end of "Takedown". Quickly move up, and when you see a civilian plane a Militia is on the roof. Don't fire at him, and let him go down so you can kill him and take his weapon. To your left, near a blue car four militia members will appear. They are equipped with either AK-47s or FALs. Take their weapon, and move backwards. Watch the left, as the small shacks are perfect for the militia to use against you for cover. Go to the other side, because it will provide ample protection.

Move slowly and cautiously forward, killing any Militia that appear. When you reach the Dragunov (and anywhere left or right of it), a Technical will destroy a makeshift barricade. Quickly kill the gunner, and if you are fast enough, the other two. Don't shoot if they make a u-turn as the explosion of the technical can easily kill you. Another technical will appear, so do the same against it. Before advancing, search the bodies to find any spare ammo. Remember to grab the Dragunov before leaving.

As you reach the next area, man the M2 Browning Machine Gun on the Technical and start firing on the militia. Fire on the ones on the street first, then the ones on the rooftop. Keep moving until you reach a small abandoned lot. Move carefully, as on a second floor balcony a militia sniper is there, using the deadly Dragunov rifle. Kill him either regularly or by shooting an explosive barrel next to him. Move carefully, and a door will kick open. Three militia members will come out, so kill them and search the second balcony for the sniper's Dragunov for extra ammunition.

Take your next path (the left path is more safer then the right due to another sniper on the right path). Watch out in this area, as the militia are now beginning to pack more power by having shotguns like Model 1887s and Rangers (can be akimboed). Clear the enemies carefully, as there is a large amount of militia. Take the building path. When you go on the first building, on the staircase be extremely careful as in front of the staircase is an enemy, usually with a shotgun. Quickly use the buildings to flank the enemy militia, and once they are all dead search the whole area.

MacTavish will now say to watch the alley to the left. You don't have to go there, but you can if you want. One enemy is behind a door. Once that door opens two more enemies will appear on the rooftops. Three enemies are hiding next to the house behind some garbage cans/dumpsters. Once they are all eliminated, regroup with the squad. In this firefight, you will need to be careful as there is another sniper, and two enemies using RPGs on you. As you get closer to the market, another Technical will appear.

Once the enemies are dead, move towards the market. More hostiles will appear, having various weapons. Once they are all dead, head towards the LZ. Nikolai flees due to massive RPG fire, and you meet up with him somewhere safer. Kill the militia that appear, and jump to the rooftops. You will now face an impossible jump, but you need to jump anyways. You will then fall into a militia-ridden street, and you need to escape quickly. Run, and ignore any enemies that fire upon you. Follow the given path, and you will end up on the rooftops. Head towards Nikolai's Pave Low. You only have 30 seconds to reach him. Once you see a ladder from the Pave Low jump to it and you will complete the level.

Intel No. 4
Add a photo to this gallery

Ghost and the others are trying to escape on the Brazilian Militia.

The team escaping the favela and heading for Nikolai's Pave Low.

An angry mob headed for Roach, who is trying to regain his bearings.