Regroup with Ghosts.
Prevent teammates’ execution.
Evac to the river for exfil.

"The Hunted" is the ninth campaign mission of Call of Duty: Ghosts. It involves escaping from the Federation after capturing Rorke in the previous mission, "Birds of Prey". After Rorke escapes, Logan, Keegan, Merrick, Hesh and Elias have to navigate through the deep forest, crawling with Federation soldiers.

The Ghosts interrogate Rorke aboard their plane. Logan punches him in the face repeatedly, but Rorke refuses to give them any useful information. When Elias opens the cargo bay door, Logan and Hesh grab Rorke's chair and threaten to drop him out of their plane. However, a Federation gunship rises into view, escorted by at least four aircaft, all of which open fire on the Ghosts’ aircraft, dealing destructive damage. The gunship then launches ropes onto their now-destroyed aircraft, latching their Gunship to the Ghosts’ aircraft and further tearing its fuselage due to air resistance. Federation soldiers fast-rope in and rescue Rorke, and then the gunship detaches Ghosts' plane, leaving the plane falling out of the sky. The Ghosts survive but are scattered. Hesh is with Merrick, Keegan is with Elias, but Logan is alone. The area is crawling with Federation soldiers. Logan successfully makes it past them. After Logan regroups with Keegan and Elias and rescue Merrick and Hesh, they proceed to a rally point to be rescued and taken to the U.S.S. Liberator. On the way, they move past countless patrols, keep hidden, and witness a missile launch. Once they make it to the rally point, two friendly river boats approach with Riley riding on one of them. 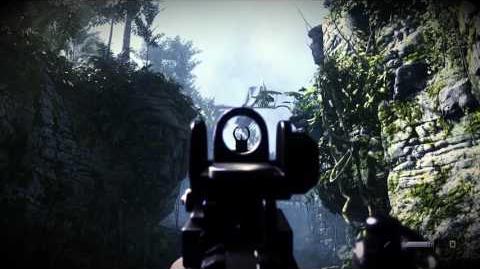 Retrieved from "https://callofduty.fandom.com/wiki/The_Hunted?oldid=2523104"
Community content is available under CC-BY-SA unless otherwise noted.