The Corridor of Death

"Taking the Mace was one thing. Now... now, we have to hold it!"
— Stan Jackowicz

The Mace is the thirteenth and second to last mission in Call of Duty 3 and last Polish campaign level in the game.

The first wave of German attack begins when the player enters his emplaced Sherman Firefly. The player is tasked to hold off German Panzer tanks until the players tank itself is destroyed. The player is rescued by Cpl. Rudinski. The player must fold into the trench. He fights with Ulan and Rudinski and meeting the private Olszewski whose tank is destroyed. He climbs the hill and enters the trench where he finds Papa Jack, Kolwalski and Nowak. Kolwalski was killed in an explosion.

Papa Jack gave the order to withdraw. Walczak organize the folding of the soldier. Papa Jack, Ulan, Bohater, Nowak, Wisniewski, Rudinski and Walczak meet to give the order : Ulan and Wisniewaki will go through the trenches to fight to Germans, Rudinski and Walczak cover them, Nowak and Papa Jack pass through the sides. For the player, there are two ways to go: To snipe the Germans or directly hit the trenches. The player will then be offered to take the Scoped FG-42 to take down the Germans on the hill. In Veteran, the player may want to snipe the Germans to avoid being shot. However, the player will take a lot of gunfire running down from the hill. In the trenches, take out the Germans and avoid being shot by the tank. Continue pushing forward and eventually reach the hillside bunker.

The player must advance to a small hillside with small wooden bunkers. There, Pte. Baron, the Canadian radio operator will be waiting. The player must use the artillery to hold off a barrage of tanks from taking the hill. The player is then ordered to escape to the top of the hill. Soon, Baron is killed and the player must cover Marek Ulan as he attempts to salvage the radio from Baron's jacket. Then retreat up hill to a manor house where team believes that the Canadians have broken through. However, they are mistaken, and a tank shot from below kills Rudinski, Krol, and Gorski, much to the despair of the other tank crew members. Enter the house and come out to another bunker and call in the artillery strikes. Then when the post is no longer safe, retreat up hill again. In Veteran the player will need to use a smoke grenade on the hill, because the bunker will be attacked by Germans and flanking on the left when going up hill.

Take cover and hold off the Germans. After killing a set of amount of Germans, they will push forward. Fall back with Ulan. Go up and take the turn. Go prone. The barricade will be blown up and smoke grenades will be popped everywhere. Shoot them until the smoke is out. Take cover and kill them all. Before taking the Panzerschreck, pop smoke. Destroy the tank and keep shooting enemies. Soon the player will see a green smoke is popped in the middle of the Mace. Canadian fighter planes will be here. 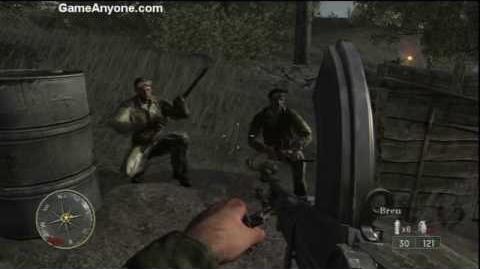 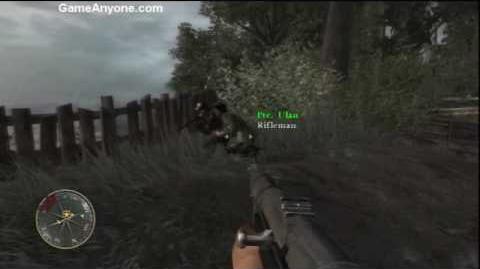 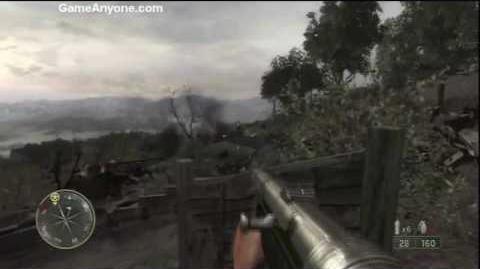 Call of Duty 3 HD - The Mace 3 3
The Mace walkthrough part three
Add a photo to this gallery
Retrieved from "https://callofduty.fandom.com/wiki/The_Mace?oldid=2474060"
Community content is available under CC-BY-SA unless otherwise noted.