Survive against the limitless waves of the undead.
Recover the Blade of Barbarossa. (primary objective)
Defeat Straub and the Stadtjäger. (secondary objective)

"Berlin is burning, and the power of the final Reich has been laid bare."
— Mission Briefing

The Shadowed Throne is the fourth Nazi Zombies map in Call of Duty: WWII. It is part of the game's second DLC, The War Machine.

The Shadowed Throne is a medium sized map, taking place through various structures and areas in the war-torn city of Berlin.

Players will spawn in the "Underbelly," a basement-like area. Within this room are both the Kar98k and Sawed-off Shotgun weapon lockers, both costing 500 Jolts each, Lebenblitz, the Resupply Package, and a door to either the Apartments or the Destroyed Building, each costing 750 Jolts. There is also the option to pick up a shovel on the ground near the Sawed-off Shotgun weapon locker as well.

The Apartments can be access from either the Underbelly or the Destroyed Building, both doors costing 750 Jolts. In the basement of the Apartments is a small caged-off workshop, where the Wunderbuss can be assembled once the player has collected the necessary parts. Within this area is a small room which can be opened during the map's easter egg, which contains the Nachtmahr. To the right of the staircase leading upstairs is a Geistchild machine and the Type 100 weapon locker for 750 Jolts.

On the second floor of the Apartments if coming up from the basement is a small room containing a broken elevator and the SVT-40 weapon locker, costing 750 Jolts. In the next room is a bedroom and a small hallway. Branching off to the right of the hallway is a small passage that contains a safe, as well as the second door leading into the Destroyed Building. Within this safe is the Perchta, which can be obtained during the map's easter egg.

At the end of the hallway is a small room containing some filing cabinets. There is also a door costing 1000 Jolts that brings the player onto Main Street.

The Destroyed Building can be accessed from either the Underbelly or the Apartments. Across from the doorway coming from the Underbelly is another Geistchild machine, as well as an empty elevator, which will contain the Ubersprengen once the player completes a small task involving the Wunderbuss. There is also two weapon lockers in this area, the Reichsrevolver, costing 500 Jolts, and the Waffe 28, costing 1000 Jolts. At the highest point of the area is a door costing 1000 Jolts, which when opened, will give the player access to Main Street. There is also a Mystery Box location to the left of the doorway as well.

The Main Street is one of the central areas of the map. Within this area are a few things for the player. A Geistchild machine is located near the 1000 Jolt doorway from the Apartments, as well as Laufenblitz directly behind the machine. An MP-40 weapon locker costing 1000 Jolts is also here as well. The Puddle Trap is also located in a crater on the street itself. Above the street is a raised area, containing a radio, which is used heavily during the map in order to obtain the Wunderbuss, open the Ubersprengen, and various other things for the map's main easter egg, as well as tuning the radio to 39.0/39.0 will award the Thule's Errand camouflage. There is also a spiked baseball bat the player can take for a melee weapon. To the right of the doorway coming from the Destroyed Building is a wooden platform, which will break if the player stands on it, revealing a one-way passageway back to the Underbelly.

The Cabaret contains several things for the player. On the left side of the Cabaret will be a 1500 Jolt doorway leading to the Plaza. A Geistchild machine is directly across from this as well. Continuing upwards will be the M1928 weapon locker, as well as a potential spawn location for the Wunderbuss battery to the right of it. There is also the main stage area, containing the Broken Blitz Machines Trap. The STG44 and Lee-Enfield weapon lockers can be found in this area, the former located under a pile of rubble and costing 1500 Jolts, while the latter is located to the left of a projector and costs 1600 Jolts.

Backstage of the Cabaret is Schildblitz, as well as the Trench Knife, which is located to the right of the 1500 Jolt door leading to the Plaza from backstage. If this door is opened, then the other 1500 Jolt doorway in the Cabaret will be opened as well, and vice-versa.

The Museum connects Main Street and the Plaza together. There are a total of three levels of the museum, with the first floor containing a PPSh-41 weapon locker for 1000 Jolts, as well as a Geistchild machine and a doorway leading to the Plaza for 1500 Jolts. There is also a potential spawn location for the Wunderbuss battery to the left of the Geistchild machine. The Ice Pick can be found to the right of the stairs leading up to the next floor.

On the next floor is a Mystery Box location, as well as the M1 Garand weapon locker. The top floor is a small hallway, containing the Combat Shotgun weapon locker and Faustblitz, as well as the Holda, which can be obtained during the easter egg. To the right of Faustblitz is also another location for the Wunderbuss battery. At the end of the hallway is another 1500 Jolt doorway leading to the Plaza, which will be opened automatically if the player opens the one on the bottom floor, or vice-versa.

The Plaza is a medium sized area of the map, being connected by the Museum and Cabaret, and gives players access to the Church and later Barbarossa's Refuge. Within this area is a Geistchild machine, located to the left of the area containing the large wooden doorway leading into Barbarossa's Refuge and 1500 Jolt door into the Church. Further to the right of this is a small alleyway which contains the BAR weapon locker and a passageway into the backstage area of the Cabaret. Kugelblitz is located in this area as well, being situated to the right of the Bomber Prop Trap.

The M1941 weapon locker is located between the doorways leading to both the Museum and the Church at the leftmost side of the area, both costing 1500 Jolts. However, if the main doorway to the Museum is opened by Kugelblitz, then the Museum door by the M1941 will automatically be opened, and vice-versa.

The Church is a relatively small area of the map. There is a large wooden doorway on the right side of the area, which when opened, will open up Barbarosaa's Refuge. Inside the main part of the Church is the inital Mystery Box location, as well as the FG 42 weapon locker, costing 1600 Jolts. There is also a large map of Nazi Germany on the right wall, as well as a radio frequency chart, which is used to contact Mikhail with the radio. Schnellblitz is also located in this area, on the small ledge outside of the main entryway of the Church.

Barbarossa's Refuge can only be accessed once the player opens the area during the map's main easter egg with the use of the three special melee weapons. This area is a small square courtyard, where the Blade of Barbarossa can be obtained during the easter egg. There is also a Grease Gun weapon locker within the area, costing 1000 Jolts, and another Resupply Package as well.

The Zeppelin is the final area of the map the player can access. It can only be accessed during the map's easter egg. Within this area is where the boss fight against the Stadtjäger takes place. There are also two weapon lockers, the MP-40 and the FG 42. Each of the areas in the Zeppelin can be opened by using the control panels around the area to re-route the power.

Near the drop pod the players enter the zeppelin from is another Resupply Package, as well as a Wunderbuss the player can take if the player bleeds out.

The map's layout as depicted by the Cabaret's projector. 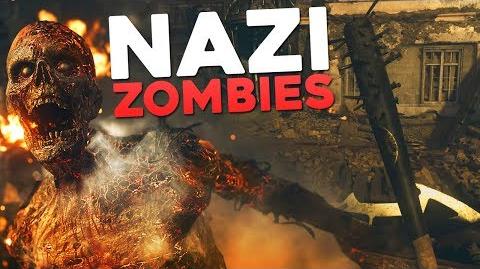 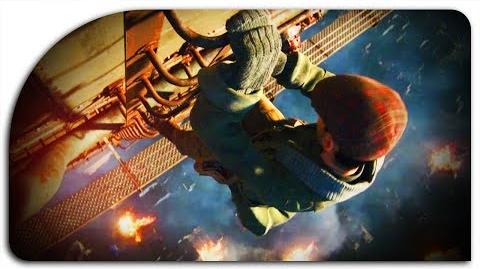 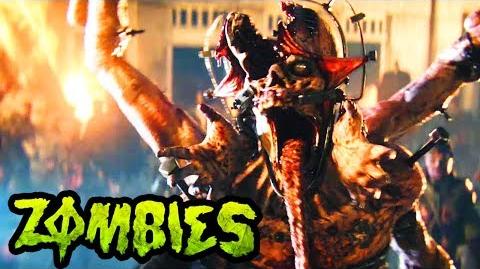