On the map The Shadowed Throne, there are a total of three different recorders the player can pick up within the map, with a single recorder counting for one individual file. The player can listen to any of the files they obtain from the "Recordings" section of the "Dossier" tab under the "Soldier" tab.

All of the files are from Peter Straub, each created during the trip between Heligoland and Berlin.

Unlike the previous maps, there are certain steps that need to be taken in order to reach each of the three recordings.

Peter Straub: Yes, yes - Mittelburg was a complete loss. But I had already moved most of my-- most of the soldiers to our storage facilities by the time the Allied agents arrived. And our island fortress, Heligoland. It served it's purpose as well. Yes, the loss of equipment, of materials, the thousands of pristine corpses... and the Hilt! These things have weighed on me. Heavily. But we have other facilities. Other plans. I have been... meticulous. Oh, and I have made sure to extend my thanks to those that I feel were responsible for these losses. But this must all be taken in scope of the grander picture. The vanguard of the Final Reich has taken wing, and clouds of doom hang over the Allied forces. And when our enemies look into the sky, as the shadow falls across their faces... they shall see me, staring back at them.

Peter Straub: Learn from your losses, and they become victories. This is true in research, and it is true in war. Mittelburg and Heligoland were good lessons. Our excitement in discovering the geistkraft energy made us far too reliant on it. It became our Achilles heel. The Hilt allowed us to bring the dead back to life. It provided the catalyst. Now we can take what Barbarossa has given us and build it into something greater. Now we can apply German thought. German engineering. German power! A power that shall shake the world!

Peter Straub: I received a call from the Führer himself. The Russians are moving into Berlin, filthy barbarians... they are burning the one-time Kingdom of Prussia, the Weimar Republic, and the throne of the third Reich. They know not what they do. They know. Not. What. They. Do! They have forced my hand. And now they will be pulled apart by the claws of my untoten. Every...everyone in the city shall die. Horribly. Horribly! The Führer has already left the city, and now it is my job to cleanse it of this infection. Those loyal to the dream of our leader will understand. Someday... Someday they will understand. 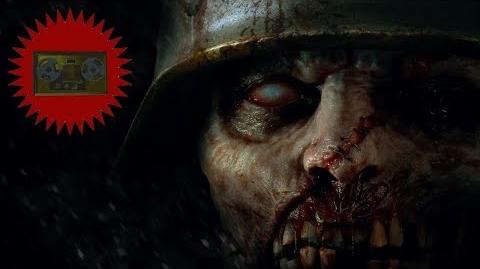