Call of Duty Wiki
Register
Don't have an account?
Sign In
Advertisement
in: Articles to be expanded, Call of Duty: WWII Nazi Zombies Maps

"Help the Bureau extract the pieces of Barbarossa's Sword out of enemy territory and into the hands of our agents."
— Mission Briefing

The Tortured Path is the fifth and penultimate Nazi Zombies map in Call of Duty: WWII. It is part of the game's third DLC, United Front.

Unlike most Nazi Zombies maps within the game, The Tortured Path brings the player through three different submaps with the objective of surviving a total of eleven waves. On Waves 3, 6, and 9, the player will be tasked with completing small objectives, which randomize each game. Failing to complete any of these tasks will result in a mission failure. Upon the completion of these special rounds, an Allied airdrop will bring the player supplies, including a Taschen Voll, a Volle Rüstung, a few Jolts, and some random weapons. The Ripsaw and an upgraded variant of the Tesla Gun will appear in the airdrops on Waves 6 and 9. On Wave 10, the player will be forced into a small boss battle, with the boss being different on each map; the Raketenbrenner is featured on "Into the Storm", the Stadtjäger is featured on "Across the Depths", and the Guardian is featured on "Beneath the Ice".

In terms of weaponry, the map lacks the traditional Mystery Box and the Weapon Lockers. Instead, they are both replaced by the Waffenbox, a utility that appears throughout each of the maps, dispensing the player a weapon based on which weapon type is featured within it. There are a total of six Waffenboxes around each map, with the starting weapon and Submachine Gun Waffenboxes being available by default. Upon the completion of Wave 3, the Assault Rifle and Shotgun Waffenboxes will turn on. Finally, after Wave 6, the Sniper Rifle and Light Machine Gun Waffenboxes will turn on. There is also an Ubersprengen on each map, which can be turned on by filling a total of three special coil like devices, each marked with a green light above it. However, only one can be activated on the initial spawn wave, while the other two will be able to activate after Waves 3 and 6 respectively. Upon filling all three of these devices with enough Geistkraft, the Ubersprengen will be unlocked. With all of the maps, all of the Blitz Machines, with the exception of Random Blitz, appear.

Around each of the maps are small ammo crates, which can resupply the player's current weapon up to three times, with the price of the ammo box increasing upon each purchase. The Resupply Package can also be found on each map as well.

Chapter 1: Into the Storm

"With European skies controlled by Nazi zeppelins, the Bureau is forced to use a caravan to reach their port in Malaga."
— Mission Briefing

Chapter 2: Across the Depths

"The voyage South is fraught with danger, with U-Boats set to target any new vessels en route to the Antarctica."
— Mission Briefing

Chapter 3: Beneath the Ice

"The Nazi territory of Neuschwabenland hides an ancient secret, a horror buried in frost for millennia."
— Mission Briefing 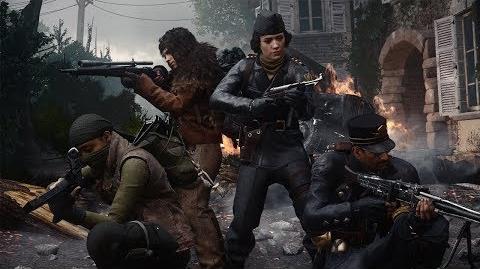 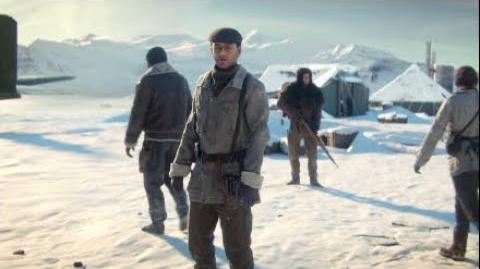