Their Land, Their Blood

Their Land, Their Blood

Advance to the river
Choose a Path to Advance, LEFT or RIGHT
Break through the German Defenses
Eliminate All Enemy Tanks
Regroup at the Barn Entrance
Destroy the Last German Tank
Follow Reznov into the Barn
Advance up the Road
Enter the German Camp
Clear the German Camp
Eliminate fleeing Germans

"See how things have changed my friend. Now it is their land...their people...their blood."
— Reznov

"Their Land, Their Blood" is the second mission in Call of Duty: World at War in which the player plays as Dimitri Petrenko, and the fifth mission overall. This mission takes place three years after the previous mission, "Vendetta". The scene of Stalingrad has gone and now replaced with the main setting of Germany. This and the next mission in the Eastern Front campaign take place at Seelow Heights. This mission and the next one take place during the push on Berlin.

At the beginning of the mission, Petrenko is being held captive in a small farmhouse by German soldiers. While reaching for a fallen comrade's rifle, Petrenko is kicked in the face, but before Petrenko is killed, a T-34 blows a hole in the side of the building. Then, Reznov emerges through the smoke, along with a new recruit, Chernov. Two of the German soldiers inside are incapacitated, and Reznov kills the other with his PPSh-41. Reznov hands the player a Mosin-Nagant, and instructs Chernov to kill the dying Germans. Chernov does not, so Reznov tells Petrenko to. Inside the hut, there is an FG42.

This decision is required for Chernov to say the "good" or "neutral" quote when "Downfall" begins.
Petrenko spares the Germans.

This decision is required for Chernov to say the "evil" or "neutral" quote when "Downfall" begins.
Petrenko kills the Germans. It's recommended to knife them to conserve Mosin-Nagant ammo, even if there might be plenty of ammo for it.

When the player exits the farmhouse, there is a small group of stacked boxes, here there is a PPSh-41, the player will then come across a scene of Soviet T-34s advancing up a path between wheat fields and Russian infantry fighting Germans. Reznov will order the troops to burn the wheat fields. After the field is alight, Germans will run out and try to escape. Don't bother interfering, the player's allies will kill them for the player. Follow Reznov and the allies down the road to a river. There the player will find a group of Germans defending the fjord across it. Note the fact that they will continually reinforce themselves. A bolt action like the Mosin-Nagant would be useless in a situation like this, and the pistol is just a pistol. The FG42 will spray lead all over, probably killing every enemy who comes. There is a big rock in the middle of the river that the Germans love to take cover behind. Throw a Molotov at it to take them out.

When the player crosses the river, he/she will have a choice; go left or right? Turning left, the player will run into more enemies and the player will have to crouch in the trench because it is too short to provide cover from the machine gun. Turning right, this direction will take the player to the underground barracks where the player can find an FG42. The right way provides fewer enemies, several deployable MG42s, and the high ground. However, there isn't a direct route down to the MG nest. Petrenko and his comrades will assault a viaduct near farm areas. After the player has killed the enemies, the player will have to run through the trenches and across the field before more spawn. Plus, the player won't have ammo for the FG42. Run down under the bridge and then go up the trench to the big farmhouse. Eliminate the three approaching enemies.

When the player reaches the barnhouse, pick up the Panzerschreck, but then quickly bring out the other weapon the player carries because picking up the Panzerschreck because the tanks and infantry to advance. Some Panzerschreck wielding enemies will run up onto the balcony and start taking potshots at allied tanks, take them down. Also, if the player gets too close the tank, the nearby Germans will kill the player. Take a shot at the nearest tank,then get back, or it will blow the player up. The player will have to stay out of its way for a short while, then it will forget the player and the player can get in the second and fatal shot. While the player waits, take out the other tank that's farther away. After eliminating the tanks, run to the trench with the flashing Panzerschreck in front the three-story building. When the player reaches it, a third tank along with its accompanying infantry will come out. Go prone and crawl up to the very top of the trench until the player can just see the tank. Shoot it, then get up and hit it again. Repeat this with the fourth tank, then mop up survivors. Reznov will lead the squad up to the barn. Evidently, there are Germans hiding inside. Just as he tells to soldiers to open the barn doors, those very same doors explode and a tank bursts out. It is possible to save the Russians that open the door if the player throws a grenade at the door; the Russians will flee from the grenade but the tank will still come out. The player should take a position at the side of the barn so the moment the tank rolls out, the player can shoot it, giving the player a chance to destroy it before it fires. The allies should kill all the enemy infantry.

When Reznov opens the door, go and get onto the back of a tank. When the player reaches the German base, get off and run through the anti-tank barricades. There are more deployable MG42s here. When the player reaches the flashing Panzerschreck, crouch and take out the truck full of Germans that drives into the area, then blow up the tower. Wipe out the stragglers, and move through the hole in the fence to the main camp. Another truck full of Germans drives up, but if the player fires quickly, that can be blown up and an unnecessary firefight avoided. Run down the road to the barricade that blocks the forward progress. Do not dwell here long as there isn't a way through. Instead go to the right and pass in between the tents.

The player is now in another clearing. In front of the player is a tower which the player should destroy with that handy Panzerschreck. There is a German hanging around there who should immediately be eliminated. From here on all the player needs to do is spam. There is a platform with a squad of Germans on it which the player should throw a grenade or two onto. There is a truck next to that which Germans take cover behind, use any extra Panzerschreck rockets the player has to destroy it. Then throw all the grenades/Molotovs left to the player in between the truck and platform between bursts of gunfire (an automatic weapon would be great) until every enemy is dead. Then pass through the platform or around the truck to the road where the player sees the German convoy trying to escape. The allies will take care of them, and the mission ends after Reznov gives a speech. 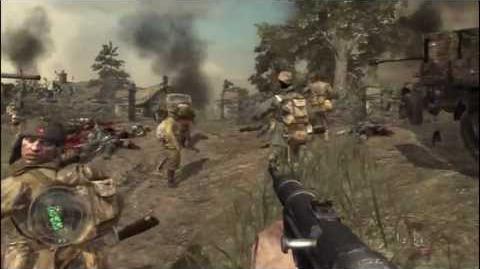 Call of Duty World at War - Campaign - Their Land, Their Blood

In the trenches with an MG-42.

In the trenches with a Gewehr 43.

) - Complete Their Land, Their Blood on Veteran.

Main article: Their Land, Their Blood/Transcript