Thermite Grenades were used in the mission "The Battle of Pointe du Hoc" in Call of Duty 2 to disable the captured German howitzers.

Thermite is present in the game files as an inventory icon. It however is not found anywhere in-game.

Thermite is also present in the game files as an inventory icon (the same icon from Modern Warfare) but also has two other texture files of the grenade itself with different color schemes.

In "Black Tuesday", Derek "Frost" Westbrook plants some Thermite on the base of an enemy communications relay, lighting it with a wireless clacker (similar to the one used to detonate C4) and in the process destroying it.

It also appears in the Special Ops mission Over Reactor where the player has to disarm it before they can enter the submarine.

The Thermite on the Jamming Tower in "Black Tuesday".

Approaching the Thermite on the submarine in "Over Reactor".

Thermite is seen in the level "Clockwork", where the Ghosts use it to melt the firewall's hinges. After being melted, the rest of the door is blown off.

Knox uses Thermite in the level "Bio Lab" to incinerate Atlas servers. It also used by Atlas in "Armada ".

The Thermite makes it debut in Call of Duty: Black Ops III as a lethal equipment unlocked at level 29, where it ignites to cause a radius of fire to burn on the ground. It works similarly to Nova Gas Grenades from Black Ops, except that Thermite is much more damaging to players, lasts a shorter duration, and covers only a circular area on the ground instead of the spherical area the Nova Gas covers. Thermite is easily distinguishable from the blue flames emitted on the ground, and as such, can be deemed useless if used aggressively, as enemies that see it from afar can alert their teammates about the hazard. However it can be used effectively to flush enemies out of certain areas allowing your team to push forward or take out a group of enemies who have an area locked down.

First person view of the Thermite.

Third person view of the Thermite. 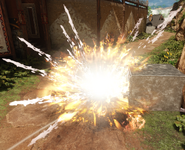 The explosion of the Thermite.

The lethal heat zone created by the Thermite.

Thermite is seen in the level "D-Day" and "Hill 493". Daniels uses Thermite grenades to destroy the artillery, flak guns and to disable a Tiger II tank.

Destroying the GPF cannon in Normandy with thermite and TNTs 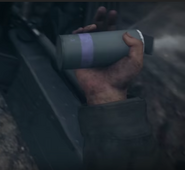 Putting a thermite into an artillery shell.

Putting a thermite into a Tiger II tank.

Thermite returns in Call of Duty: Modern Warfare but this time in a throwable form.

It functions as a combination of Semtex and a Molotov, being able to stick to any surface and burns fiercely on impact. Four projectile variants also exist, in the form of the FTAC Backburn 20" Bolts, the 25×59mm Thermite 5-R mag, the MGL-32, and the 40mm Incendiary.

"Explosive which burns fiercely for a short period of time after impact. Sticks to surfaces."
— In-game description

The Thermite returns in Call of Duty: Vanguard and functions similiar to the previous games.