"The pinnacle of stealth and precision, the Throwing Knife kills instantly on contact."
— Call of Duty ELITE description

Simon Riley uses the Throwing Knife to injure Manuel Roba in his home in Mexico.

Riley throws a knife at Roba.

The Throwing Knife is seen only once in the campaign, at the end of "Endgame", where John "Soap" MacTavish uses it to kill General Shepherd. However, it uses a different model from the multiplayer version; it rather looks like the Combat Knife.

In multiplayer, the Throwing Knife is unlocked as Equipment at level 7. It deals the same damage as the regular Knife; it is always a one-hit-kill unless in a private match with health set to double. It also bypasses Last Stand or Final Stand and immediately kills the player, just like the Knife.

Players will receive only one knife; however, any thrown knife can be retrieved, regardless of who threw it, assuming the player has selected the Throwing Knife as equipment. It can also be replenished with Scavenger.

After throwing the knife, a number of events can happen:

The Throwing Knife is popular with stealth classes as it is silent, gives no warning (unlike grenades), and even if the player misses, there is a good chance the target will not notice (unless they see the knife go straight by or they hear it ricochet).

However, it has a short effective range, as it rapidly descends towards the ground the farther it is thrown. Thus, at longer ranges it is necessary to aim above the target for it to be thrown accurately. The throwing knife is considered one of the hardest weapons to master because it requires practice to aim at targets and throw it, usually in a quick succession and during movement. 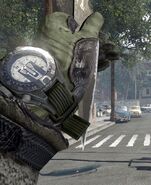 Throwing Knife, before being thrown.

Throwing Knife, after being thrown.

The Throwing Knife briefly appears in Call of Duty: Black Ops. During the mission "WMD", before approaching the main control room, Grigori Weaver opens a door and is immediately faced with an enemy. Weaver proceeds to throw a throwing knife at the soldier, piercing his neck, instantly killing him. Weaver then retrieves his knife. It is the Throwing Knife's only appearance in the entire game, as it is essentially replaced by the Tomahawk in multiplayer.

Grigori Weaver retrieves his Throwing Knife from the body of the dead soldier.

All factions
Throwing Knives appear in Call of Duty: Black Ops (Nintendo DS), first spotted in the launch trailer. Unlike the consoles, this DS throwing knife is used by converting the player's own knife in a ranged weapon, via the ADS button. It also has unlimited ammo, so recovering lost knives and losing a melee weapon isn't an issue. The throwing knife is always a one hit kill, except on zombie mode, where it is a three hit kill.

The throwing knife is available in the campaign and multiplayer for the player's use, available from the start as part of the knife. Like in the consoles, the DS throwing knife can also ricochet and bounce off/on objects or surfaces and still get kills. However, the only items the knife can get stuck in are enemies and other targets, as it ricochets off of everything else.

In Zombies, it is unlocked from default and kills a zombie in three hits in the body or one headshot at any range, making a good and effective weapon for accumulating points on early rounds. Interestingly, it gives 410 points per headshot on the first round, but adds 50 points each round it passes, giving 460 and 510 points on the second and third round respectively, and so on.

The Throwing Knife makes several minor appearances throughout the campaign. It appears in the mission, "Prologue," where it appears in a flashback of Soap killing Shepherd with one, and in the mission, "Down the Rabbit Hole," where Sandman can be seen using one to kill an Inner Circle soldier while Price drags Yuri to the helicopter.

The Throwing Knife returns in Call of Duty: Modern Warfare 3. It is seen being used in the Multiplayer World Premiere Trailer. It is unlocked at level 5 and is almost unchanged from Call of Duty: Modern Warfare 2. Also, unlike all other equipment, Scavenger can replenish knives. Quickdraw is extremely recommended, as the Pro version will allow tactical and lethal equipment to be deployed faster. The Throwing Knife is ideal for stealth, as it gives no warning and deals instant death. It is also somewhat effective for killing Juggernauts if one has Scavenger, as four hits with the throwing knife will kill one. Throwing knives will stick into a Riot Shield after being thrown at.

The Throwing Knife is also the default Tactical for Infected players in Infected. The Infected players have Quickdraw Pro as a default perk to allow for easy kills. Later in the games, especially when there is a lot of Infected players it is quite difficult for the Survivors to be watching out for them and avoid the knives as the same time.

The knife about to be thrown. 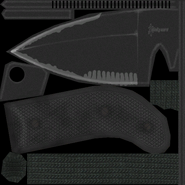 The Throwing Knife appears once again in Call of Duty: Modern Warfare 3: Defiance, with a completely new aspect. However, apart from graphical changes, it behaves almost identically to the Call of Duty: Black Ops (DS) variant

The Throwing Knife makes a brief appearance in the mission "Suffer With Me" where Woods uses one to take down a guard about to shoot a flare gun. Killing the guard with the Throwing Knife is essential for a challenge in the level.

Holding the throwing knife as Mason takes out a guard.

Thrown
The Throwing Knife returns in Call of Duty Online.

2 (with Extra Lethal; also in Hunted and Safeguard)

6
The Throwing Knife returns in Call of Duty: Ghosts. It is used by the Maniac Pointstreak, as well as on the default loadout of the "Infected" in Infected and is required to win Gun Game. It acts very similarly to its predecessors.

The Throwing Knife is used very briefly in campaign in the level "Federation Day". However, instead of using a usual knife, the player uses the Push Dagger.

It can be bought in multiplayer for six Squad Points. It is helpful when being stealthy as the player can kill enemies without making much noise. The Throwing Knife is also found in the last tier of Gun Game with the Combat Knife. Getting a kill with the Throwing Knife wins the game. It is also used in Infected by infected players, and in the Maniac pointstreak.

It can be obtained in Safeguard from Supply Drop crates. It replaces the I.E.D.s if taken. It is recommended to stick with the I.E.D.s instead as they can kill multiple enemies while the Throwing Knives can only kill one enemy at a time. 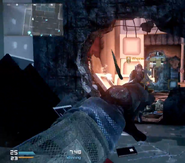 Preparing to throw the knife.

The Push Dagger being prepared in "Federation Day".

The Push Dagger being thrown at an enemy.

Jacob Hendricks uses a Throwing Knife to kill a 54i soldier in the mission Vengeance.

Nero Blackstone uses a Throwing Knife to kill his wife when preforming "a magic trick" during the intro of Shadows of Evil.

The Throwing Knife is only available in Infected and All or Nothing in Call of Duty: Infinite Warfare. In Infected, the infected are only allowed to use it. It is replaced by the Bio Spike for use in other multiplayer modes and Zombies, where the only difference between them is that when the Bio Spike hits a enemy body it provides a mini-explosion that can kill other enemies around them, and the player who threw it if close enough.

"Throw it and pick it back up."
— Description

The Throwing Knife returns in Call of Duty: WWII.

The Throwing Knife returns in Call of Duty: Modern Warfare. Its appearance is very similar to the Combat Knife. In the campaign, it is used by Farah Karim in the mission Embedded and is found in the level for the player to use.

In multiplayer, players can use the Throwing Knife as a melee weapon which deals one-hit kills if they have it equipped and as long as they have any knives with them, or else they will resort to using the butt-stocks of their respective gun. Throwing knives are replenished with the Scavenger perk equipped, and/or with the Restock perk equipped.

Thrown knives can be collected once again. Unlike most games, thrown knives can bounce off walls and the ground in certain situations. They can be repelled away by explosions, further increasing its lethality.

In Infected, infected players equip a pair of Throwing Knives along with a Tactical Insertion as a Tactical.

There are variants of the Throwing Knife which only serve a cosmetic purpose and don't have any effect in gameplay.

Whilst the Throwing Knife itself is unusable within Call of Duty: Mobile, Édouard "Templar" Couteau utilises them within the Comics.

Dead soldiers having been stabbed by Templar.

Charly is wounded by a Throwing Knife.

Bell briefly uses a throwing knife in one of the sequences for Break on Through.

In zombies, the player can hold up to 5 throwing knives and can be crafted for 300 Salvage at a Crafting Table. 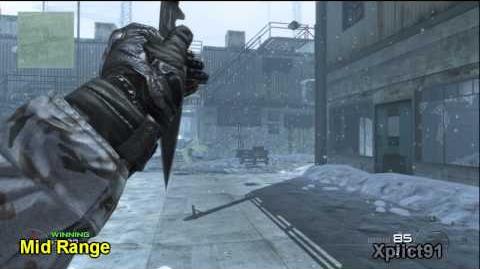 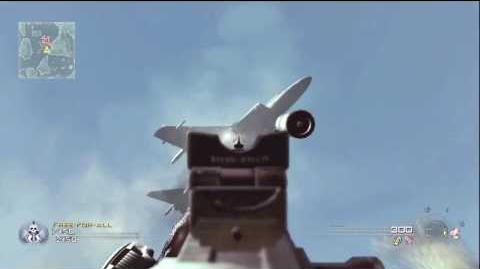