Unlike the undermounted grenade launchers, the Thumper has iron sights the player can aim with. Like the undermounted grenade launchers, the Thumper also starts with two grenades without the Scavenger perk. When hip firing, the iron sights are brought up for the shot, much like the RPG-7, though it can be hip-fired in the campaign. Even if firing while already aiming with the ironsights, there is a noticeable delay between pressing the fire button and when the grenade is actually launched. This delay makes firing accurately more difficult, as the player must compensate for this while moving. As with the other grenade launchers, grenades that impact a solid object before they reach a certain distance from the user will not explode, but will still inflict damage and kill an enemy in one shot, unless the enemy is using Painkiller.

Although Scavenger and Danger Close are both extremely effective with the Thumper, some people consider using Sleight of Hand Pro if they are using it with a "Run and Gun" class, due to the weapon's inability to Reload Cancel. This also allows the Thumper to be fired more quickly as Sleight of Hand Pro lets the player aim down the sights faster, which is required to fire the Thumper.

As with the PKP Pecheneg in Call of Duty: Modern Warfare 3, the player is automatically programmed to reload this weapon with Sleight of Hand.

The Thumper in third person.

A Thumper on a shelf in "The Hornet's Nest".

Hidden in the games code is the ability to have Akimbo on the Thumper. Since it was never finished, the reloading animation is coded the same as that on the normal Thumper, and so it shows the player with four hands. There are two right hands holding each Thumper, even though the player's left hand should be holding the Thumper on the left. As well as this, pressing the shoot button will fire both regardless of which button was pressed, emptying the gun.

This makes the Akimbo feature useless unless one explosion takes half or more of the target's health but doesn't kill them leaving them to be killed by the second Thumper. Unlike most Akimbo guns, each Thumper is only allocated one grenade, which would mean that the player couldn't have access to extra grenades versus a Thumper without attachments. Akimbo Thumper can be acquired through code "bg_forcedualwield 1".

While physically absent from Call of Duty: Black Ops, the Thumper can sometimes be seen in footage on the main menu's TV screens.

The Thumper appears in Black Ops (DS) as the M79, and it is one of the four launchers available in-game. The M79 has a decent reload time, but suffers from an extremely short range, as the grenade will descend to the ground almost instantly after exiting the barrel.

The explosion of the grenade is strong enough to kill more than one enemy at a time, but it is advisable to not shoot somebody too close to the player, as there is no arming distance, so the explosion could kill the player. In multiplayer, it is unlocked for the allied faction after 150 kills with the M72 LAW. In Zombie mode, it can be found in the Mystery Box or purchase from the wall in the third room for 3500 points.

First person view of the M79

The Thumper returns in Call of Duty Online as the M79 "Thumper".

The M79 "Thumper" in third person

Reloading the M79 Thumper in the previous version of the game.

The M79 Thumper in first person

Aiming down the Thumper's sights

Destroy any Scorestreaks 50 times with a Launcher

Multiplayer:
1+2 (If equipped with Launcher Plus)
Battle Royale:
1+38

The Thumper returns in Call of Duty: Mobile. It was added in October 2021 as part of the Season 9: Nightmare update.

The Thumper is the third launcher available, and features lower damage compared to other launchers. It also has the smallest blast radius of all explosives, and splash damage can be as low as 25, requiring much more precision compared to other launchers. Its projectile also has an arc, making precision shots even harder to pull off. Even with Demo Expert, which increases explosive damage by 25%, players can be met with hitmarkers when the projectiles lands at only a meter or so away from targets. It does much less damage compared to the dedicated launchers to streaks on the ground, as it requires two grenades compared to the one rocket with other launchers, and requires even more grenades to destroy aerial streaks.

The Thumper is not as effective at directly killing enemies compared to other launchers, and does a mediocre job at destroying ground-based streaks, while it cannot destroy any aerial streaks. Overall, the Thumper is somewhat mediocre as an actual launcher, but it does have some potential for killing enemies, though it is at a severe disadvantage compared to other secondaries in terms of killing potential.

The Thumper, like the FHJ and SMRS, are available in red supply boxes, and is not available as ground loot.

The Thumper returns in Call of Duty: Black Ops Cold War as the M79.

If the player pushes the button on the right side of the Bubby statue multiple times during the "Redlight, Greenlight" campaign mission, the M79 will be ejected. It's also found in the mission "End of the Line", and is used in "Break on Through" at the beginning of the fallback scenario.

While in the standard Zombies mode the M79 can be brought into any map via Create-A-Class, at Loadout rarity and can be found at any rarity via the Mystery Box for 950 Essence. When upgraded by the Pack-a-Punch Machine it becomes the Matter Dismantler, garnering an increased magazine size of 3, increased reload amount and increased damage. The Matter Dismatler's grenades have a damage range of 7.5 meters from the center of the impact. 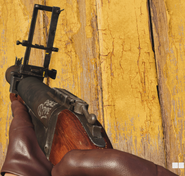 The M79 in first person. 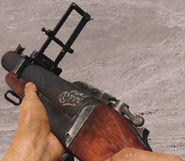