"So this is what Maxis was keeping secret!"
— Edward Richtofen

The Thundergun is a large, cannon-shaped weapon that fires blasts of incredibly strong compressed air. It has no iron sights, meaning it must be fired from the hip (although when observed in third person, it is held on the shoulder). It is able to kill large numbers of zombies with a single shot, sending them flying backwards or up. Those who are not killed by the blast are thrown backwards and will remain on the ground for a few seconds before getting back up. The Thundergun holds two rounds in its magazine, and has 12 rounds in reserve. The Thundergun can only be reloaded when all shots have been fired. The Thundergun is important during the later rounds as it is useful for clearing large groups of zombies in order to reach a downed teammate or make an escape. It is extremely useful when swarmed as it will easily kill a large group of zombies in one shot.

It is often used as a reserve weapon, as it has a low amount of ammunition and a moderately slow reload. It can only be reloaded when the entire magazine is empty, except in the campaign mission "Numbers", where one is able to execute a partial reload. Because of this, it is advised to shoot any extra rounds in a magazine before obtaining a Max Ammo power-up. Wasting ammo on one zombie or a small group is not advisable. It is also a decent weapon against Hellhounds as it can easily take large numbers of them out and will always kill them in one hit, with there also being a Max Ammo power-up at the end of a Hellhound round.

The Thundergun can be found and used in the campaign level "Numbers" as an easter egg, similar to the Ray Gun in the Call of Duty: World at War campaign mission "Little Resistance".

The Thundergun found in "Numbers" comes with two shots in the magazine and 12 shots in reserve. However, unlike in Zombies, it is possible to reload without needing the entire magazine to be emptied. It also gains a full ammunition refill after sliding down the pipe and at the second weapons cache. Because of this, it becomes very useful when playing on Veteran difficulty. In essence, it works much like an extremely powerful shotgun, throwing and almost always instantly killing anyone caught in its massive spread, often with enough force to tear off limbs.

The player can swap out for another weapon, and the player will be able to pick it back up. Sometimes after picking up another weapon, however, the Thundergun becomes unusable because of a bug.

The steps and video on how to do it are shown below:

The Thundergun can be obtained through the Mystery Box for 950 points in the maps Kino der Toten and Ascension, and in the revamped Call of Duty: World at War map Nacht der Untoten. It shoots a compressed air shock-wave blast that knocks any zombies backwards that survive the original hit. It is not advised to upgrade it until out of ammo.

The Thundergun is one of the most useful weapons in Zombies Mode, especially when another player is downed. It can clear huge amounts of the undead with minimum effort, which can help the player reach the downed player extremely easily. It can kill multiple zombies without hassle and can save the player's life, but the downside is its short range. Despite being unusable, the Thundergun also makes an appearance in "Five" in the weapons-testing lab, suggesting that the Thundergun was found by the United States and was being reverse engineered by the Pentagon.

The Thundergun was originally thought by Richtofen to have been created by Dr. Maxis and that Maxis had been deliberately hiding it from him as he grew to not trust Richtofen, although this could mean that Richtofen did not trust Maxis and became paranoid. Richtofen even referred to it as the DG-3 (meaning he considered it to be the Wunderwaffe DG-2's successor). However, one of the radios in the map, Ascension reveals the true creation of the Thundergun. It was a Russian weapon codenamed "Project Thunder" and was being worked on by the Ascension Group under Gersh's direction. Gersh knew about its range problem and was trying to fix it. He also knew about its small ammo (power cell) count.

The Thundergun in Kino der Toten; note the CCCP logo on the green tube

Interact with the tape player to continue

Thundergun ready for pick up 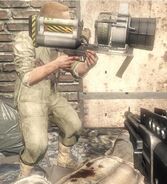 Thundergun seen in Moon's loading screen, on the right side of left page

The Thundergun in Call of Duty: Black Ops Zombies

Zombies turn to ashes instead of disappearing in the iOS version

The Thundergun can be obtained from the Mystery Box in Cyborg Rising mode.

The Thundergun returns in Call of Duty: Black Ops III available from the Mystery Box in Revelations and the remastered versions of Nacht der Untoten, Kino der Toten, and Ascension.

The Thundergun performs near identical as its Call of Duty: Black Ops version, killing large numbers of zombies with a single shot. It also has a new look and animations and zombies killed with it can now drop power ups. It still holds the same ammo capacity as the Black Ops version. When Pack-a-Punched, it becomes the Zeus Cannon, with a larger magazine and more ammo and a larger radius, much like its Black Ops version.

In Revelations, the Thundergun is also very effective against the Margwas and Panzersoldats, being able to take them down in as little as three shots.

The Thundergun in first person

The Thundergun reappears in Call of Duty: Black Ops 4 on the map Tag der Toten.

Retrieved from "https://callofduty.fandom.com/wiki/Thundergun?oldid=2496246"
Community content is available under CC-BY-SA unless otherwise noted.