For the weapon camouflage with a similar name, see Tiger Camouflage.
For the tiger enemy from the map IX, see Zombie Tiger.

The Tiger II, also known as King Tiger or Royal Tiger, was one of the main heavy tanks used by the German Wehrmacht during World War II.

The Tiger II first appeared in Call of Duty: Finest Hour, in the level Road to Remagen, at the last area, when the player must find the Panzerschreck in the house to knock it out before the Sherman tanks arrive. Then in "Last Bridge Standing", the Shermans manage to destroy it as it pops out near a warehouse. The Shermans then manage to make it through a warehouse, around a road to the bridge, starting the level "Into the Heartland". This is the only time the player encounters a Tiger II with a Porsche turret; the later games featured King Tigers with Henschel turrets instead. It required three direct hits to destroy one Tiger II.

In Road to Remagen 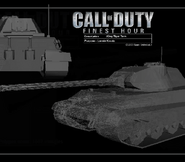 "Combining the thick armor of the Tiger with the sloped design of the Panther, the "King Tiger" was the most formidable and heaviest tank used by the German army in WWII."
— Call of Duty 3 bonus materials section.

The Tiger II appeared in Call of Duty 3 in the level "Black Baron" as a tank commanded by a German known only as "Richter" and "The Black Baron" and the objective of a Polish Sherman Firefly Tank crew. At the level's end, the Firefly crew fires at its rear after a successful air-strike by Typhoon aircraft, destroying the tank and causing it's turret to literally blow off, the crew seem very happy for this as they will be getting a promotion, then the tank explodes nearly killing the crew. The Tiger II also appeared in "corridor of death" where you had to blow up an underground basement to destroy the mighty tank.

Although the Tiger II appears in the campaign, it is replaced by Panzer IVs in multiplayer.

Richter's destroyed Tiger II by Bohater's crew in a cutscene.

A Tiger II tank in the mission "The Corridor of Death" on the PS2 version.

tiger 2 in "the corridor of death"

In Call of Duty: World at War's campaign, the Tiger II is seen as an enemy vehicle throughout the Soviet campaign. They are first seen during "Vendetta", used by the Germans against Soviet soldiers, though they cannot be interacted with and they only act as scenery and setting. They can be seen again during "Their Land, Their Blood", where the player must find a Panzerschreck and destroy four Tiger II tanks in a large farm where a battle is taking place. The King Tigers take two rockets from a Panzerschreck to be destroyed. There is a total of four initial King Tigers, and a fifth after a short moment after the first four are destroyed. They are once again seen during "Blood and Iron", where the player must destroy multiple Panzer IVs, Panthers and King Tigers throughout the level. Each typically take about five rounds from the player's T34 to destroy. King Tigers make their final appearance during "Heart of the Reich", where they act as scenery.

Although the Tiger II appears in the campaign, it is replaced in favor of the Panzer IV for multiplayer maps. 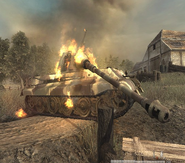 Two Tiger II tanks in the mission "Their Land, Their Blood" on the Wii version.

"The German Tiger Tank. 'King Tiger' they called it. Immune to most munitions. Are you strong enough to defeat it?"
— Sarah Hall

The King Tiger makes an appearance in the Call of Duty: Black Ops III mission "Demon Within", where the player must destroy one with rockets. Another King Tiger appears inside the cathedral near the end of the mission, which morphs into an ASP that attacks the player.

The King Tiger also makes an appearance in Zombies on the maps Dead Ops Arcade II: Cyber's Avenging as a drop and battle damaged ones litter the streets of Gorod Krovi. Some King Tiger tanks can also be seen outside the map on the Zombies Chronicles version of Nacht Der Untoten.

A Tiger II During the Hill 493 Mission

It appears on the maps Ardennes Forest and Sainte Marie du Mont.it is also on Operation Griffin which you have to escort 3 of it to the "Frontline"