Time Travel Will Tell is the easter egg featured in Shangri-La, where the characters help two explorers stuck in a time loop. The player does not need to get the Focusing Stone as long as it is picked up by another player.

Brock and Gary, two explorers, were looking for the temple to prove the existence of Agartha. They accidentally triggered the eclipse and Zombies attacked them. Gary died first and Brock followed later. The players change their fate by completing the steps of the puzzle, which sends them back to the future for every successfully completed step. When they finally reach the Focusing Stone, they travel back in time again and it becomes apparent to the players that they've been returned to the moment they discovered the temple - revealing that they are trapped in a never-ending timeloop.

In the starting room once the power is turned on, there will be four dials each on their own wall by Quick Revive. When all four players press 'Square' (PS3/PS4), 'X' (360/XB1), or 'F' (PC) at the same time, time will distort, causing the players to be sent into the past (proven by some of the things the character says), the moon to eclipse the sun, and a giant Element 115 meteor to rest above the temple in the spawn area.

The Element 115 meteorite that appears on top of the temple.

The eclipse that happens in the past.

Near the MPL (Black Ops)/Pharo (Black Ops 3), there appear to be two characters trapped in the locked area behind the weapon. A button must be pressed, similar to those near Quick Revive, in order to get them talking. They want the players to set them free, similar to Gersh in Casimir Mechanism and the four characters in Original Characters Trapped easter eggs. After they finish their dialogue, magical plates can be found scattered on the floor around the areas outside the spawn, 12 on each side.

After activating the switch from the previous step, several panels will appear along the area on the bridge, near the rotating statue and the area which contains the MPL, somewhat perpendicular to each other. The players have to make them all disappear to complete this step of the easter egg. At first it seems confusing but the method is simple. On one side, one player stands on a plate and tells another player what the symbol is. That player then steps off the tile whilst the player in the other area searches for the matching plate. Once the pair are found both players step on and those plates and they will disappear. Then simply repeat for every other one until all plates are gone. If a pair is incorrectly matched all plates will re appear and have to be paired up again. Also note that if a player stands on a plate whilst the other checks for a match, all symbols will change to a different plate. Note that this must be completed in 4–5 minutes or players will return to the present and will have to start over again. The following are known Illuminati symbols to appear on the tiles:

If done correctly the player will hear a sound and a Focusing Crystal will appear on top of the MPL boulder. 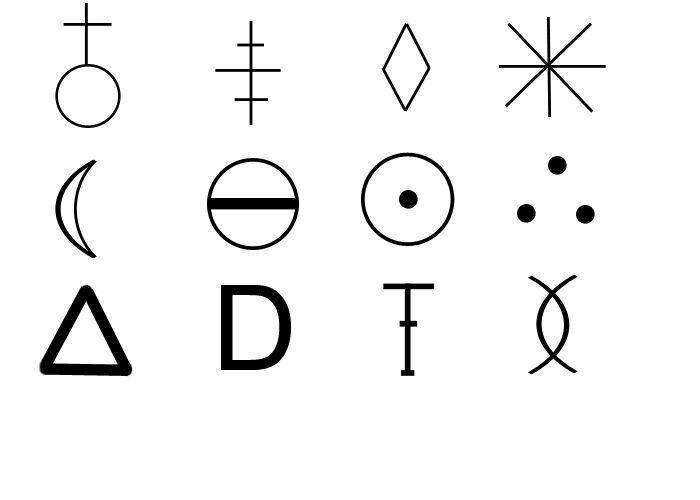 Go down to the Water Slide, but do not move from the bottom. With three players standing on the pressure plate, which is the grate with water underneath and have the fourth take the slide. The player on the slide must hit a switch on the side of the slide. The idea being that the 3 players on the grate are weighing it down so that when the 4th player comes down the slide, he hits the plate with enough force to activate it. Following the plate's activation, the Eclipse should end, ending the step.

Go to the waterfall, there should be a diamond on top of the waterfall. It can be knocked down with an explosive or a Ray Gun. When it's on the ground, shoot it with the 31-79 JGb215; it should then shrink. Knife it and it goes into the slide to the geyser. The players must launch the diamond with the geyser and it should land on a tower. A new diamond should spawn, indicating that the step was completed successfully.

The players now have to go to the tunnel that has a pressure plate in a crevice. Next to the pressure plate needed to access Pack-a-Punch, there is a gas pipe. The wheel has to be turned 4 times, until the characters can be heard talking about the gas receding. If done correctly, along the walls and ceilings there should be several gas leaks, starting from the MPL entrance all the way to the power room. And when the player's character passes through there, one can hear them coughing.

To complete this step, there must be a calm Napalm Zombie in the past. The players have to walk through the tunnel, luring the Napalm Zombie from the MPL entrance through the cave and setting the gas leaks from the previous step on fire. There are several leaks clustered about: at the entrance to the cave, near the spout launcher, and just before the power room. If done correctly, when the players return to the crevice and the tube, the lever next to it will be raised. Press the action button (X, square) to lower it. This part MUST be done during the same eclipse as lighting the gas. When the characters start talking about the floor being covered in lava, this signifies that the step was successful.

The players must travel back to the past for this step. In the tunnel with the MP5k on a board, there are now 4 holes on the side of the tunnel. The holes must be plugged with Spikemores. The best way is to lure crawlers, or the previous Napalm Zombie, towards the tunnels and place the Spikemore facing the holes, so that the Punji spikes get lodged into the holes. After this is done, the players have to go to the bottom of the waterfall. On one side of the boulder in the center, there is a brick wall, with a brick sticking out saying "Do not hold "X" /Square. Hold "X"/Square and the players will return to the present, signifying that the step was successful. Also, a new diamond will appear above the mud pit temple.

The players have to go to the past again for this step. There are 12 panels spread around. There are 5 panels in the spawn room, 2 in the mudroom area, 2 by the minecart, 2 in the stakeout room, and 1 by the left power switch. It is similar to Step 3, but instead of stepping on the panels, they must be knifed. When all 12 panels have been lit up, over by the mine cart gate, out of bounds, a snare trap can be seen. Blow it up with an explosive, such as a Monkey Bomb. If done correctly, the characters will say that it has worked, and the players will return to the present.

After completing Step 9, there is a radio found near the Minecart gate on a box, stating a code, which is "16, 1, 3, 4". Players have go into the past for this to work. After going to the past, players will have to go into the mud pit temple and set the dial to their corresponding numbers as the top number:

After this is done, the characters should say that the code worked. If done correctly, a diamond will appear above the mud pit temple, signifying that the step was successful.

In the present, by the right side of the stairs leading up to the Pack-a-Punch Machine, on the ground by the statue, the players will find a radio. If the players listen to the radio, Gary states that he lost his bag of Dynamite somewhere while being chased by a horde of zombies. The players need to travel back to the past and find the bag of Dynamite. The Dynamite will be hanging on the Focusing Crystal near the Mine Cart gate and Punji Stake tunnel. First, a player has to charge the Focusing Crystals, by finding the four gongs that make a resonating sound. To make sure that a player is knifing the right gongs, knife one and then look at the Focusing Crystals. If they are glowing red and then the red glow dissipates, the players are knifing the wrong ones. If they don't glow at all, and the resonating sound can still be heard, then find the other three gongs that make the same sound. Keep checking the Focusing Crystals, after each gong has been struck, to be sure they are being struck in the correct order. Once this is done, Treyarch's Symbol will appear above the Focusing Crystals, which will all be glowing yellow.

While still in the past, once the giant meteorite has shrunk, the players will need to access the Pack-a-Punch Machine. The machine will have vanished and the back wall will be accessible. Brock says that he can blow up the wall with the Dynamite gained by the players from the previous step. The player who caught the Dynamite will need to walk up to the wall and press the action button to give the Dynamite to Brock, through a small hole in the wall. After the conversation ends, the water will wash the players down to the bottom of the stairs. They will then be sent back to the present. While in the present, the players can see a hole in the wall (where the Pack-a-Punch Machine usually is located) from where Brock destroyed it with the Dynamite. The players will need to access the Pack-a-Punch Machine again. After the players climb the temple again, the wall will be gone, and the Focusing Stone will be floating in the center of the altar. To obtain the stone, a player will need to hold the action button. Only the person who picks up the stone will receive all eight Perk-a-Colas for the rest of the game. That player will not lose their perks if they go down and only that player will have the Focusing Stone, but all 4 players get the Time Travel Will Tell achievement/trophy.

Once the Easter Egg is complete, the eclipse buttons will be pushed in and the eclipse cannot be restarted. However, a new radio will appear at the base of the Pack-a-Punch Temple. The water that flushed down the players, following the acquisition of the Focusing Stone, also flushed out a radio. Listen to the radio. After the majority of it has played, the buttons will pop out again. This may be repeated until all four players have the Focusing Stone; however, it cannot be repeated after the fourth player has taken it. 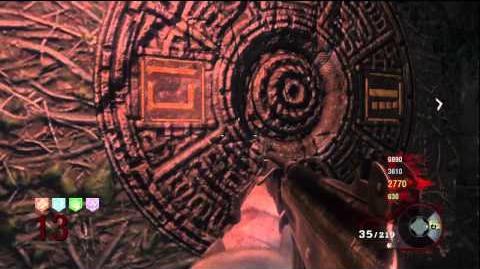