Timeslip is a Perk featured in Call of Duty: Black Ops 4 Zombies. It can be unlocked for use as a starting unlock, or alternatively can be obtained through Secret Sauce.

It appears as a Perk Vapor within Voyage of Despair, IX, Dead of the Night, and Ancient Evil, and as a traditional Perk-a-Cola within Blood of the Dead, Classified. Alpha Omega, and Tag der Toten.

When Timeslip is selected in the "Modifier" perk slot and the player has all of their other perks, The effects are applied to Elixirs and the Special Weapon at a reduced effect. 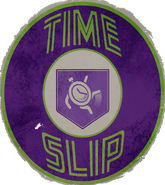 Timeslip bottle in the Aether Story.

Timeslip altar in the Chaos Story.
Community content is available under CC-BY-SA unless otherwise noted.
Advertisement