For the ballistic LMG in Call of Duty: Black Ops 4, see Titan (Black Ops 4).
For other uses, see Titan.

The Titan is an Atomic Dynamics energy light machine gun in Call of Duty: Infinite Warfare.

When all side missions are completed, the Titan unlocks the Overcharge upgrade, which hotwires it to fire faster and more lethal rounds after a short charge-up time. It is one of the LMGs along with the R.A.W. used by the Settlement Defense Front. The UNSA also uses the Titan during Operation Blood Storm.

The March 10th, 2017 patch increased the fire rate and the range of the Titan, allowing for a bolstered long-range use of the Titan.[1]

The Titan in first person 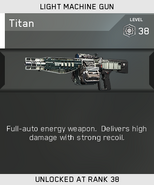 The Titan being unlocked in multiplayer 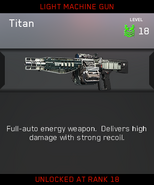 The Titan being unlocked in Zombies