600 RPM per burst and overall (both flechette and buckshot)

The Titus-6 is a bullpup Special weapon available for use in the campaign mode of Call of Duty: Black Ops II. It fires three rounds of high explosive flechette projectiles that stick onto surfaces before exploding; it must be reloaded every time it is fired, as each magazine only contains a single three round burst.

Switching modes folds down the weapon's sight, disabling ADS, and allows it to instead be used as a shotgun. The shotgun works with a two-round burst with a ten-round magazine, and is highly effective against regular infantry in close quarters. 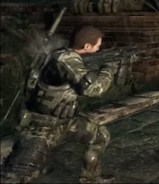 Harper using the Titus-6 to breach a temple door