Private First Class Todd Kashima is a character in Call of Duty: Infinite Warfare who serves under Omar. Kashima is shown to have a romantic interest in Nora Salter as during a mission on an asteroid floating near the sun, he jokingly asks Reyes if Salter is available, to which he replies that she is. 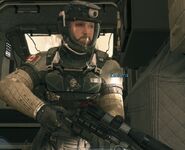 Add a photo to this gallery
Retrieved from "https://callofduty.fandom.com/wiki/Todd_Kashima?oldid=2388159"
Community content is available under CC-BY-SA unless otherwise noted.