Unknown Japanese Officer with a Katana

Sergeant Tom[3] Sullivan was an American squad leader of the United States Marine Corps in Call of Duty: World at War during World War II.

Tom Sullivan was the leader of the Marine Raiders squad that came to rescue Private C. Miller (the player) at the beginning of the game, on Makin. After Roebuck knifed Miller's assailant in the back, Sullivan strangles the Japanese officer and hands Miller the officer's Nambu pistol and assaults the Japanese base. They rescue their support squad and foil two ingenious ambushes staged by the Japanese and leave the island.

Towards the end of their assault, Sullivan saves a shell-shocked Miller from a Katana wielding Japanese soldier and drags him to the lifeboats. Two years later Sullivan, Roebuck and Miller are part of the 1st Marine Division along with many new recruits, including Pvt. Polonsky. Miller, Roebuck and Sullivan are known as the 'old breed' by the recruits although none of the three were out of their twenties yet. Sullivan's squad and the 1st Marine Division assault Peleliu Island but their operation goes haywire and they get pinned down on the beach until Miller calls in a rocket strike destroying the Japanese machine guns.

They make way for an Allied landing force, in which Sullivan tries to force open a door to get out after hearing a Japanese soldier scream, but Sullivan is mortally wounded when a Japanese officer bursts through the door and impales him through the stomach with a Katana. His assailant is quickly gunned down by Roebuck, Polonsky, and Miller but Sullivan dies soon after. According to Roebuck, the whole squad was stunned and agonized by Sullivan's death, Roebuck especially. He refers to Sullivan as "the most solid, dependable and courageous Marine we've ever known."

Polonsky also mourns Sullivan's death, lamenting, "I thought Sullivan would make it through for sure." At the start of "Hard Landing", it is revealed that Sullivan's body is being sent back to his family and Roebuck is promoted to Sergeant and takes command of the squad. 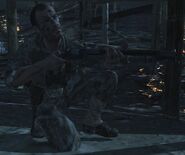 Sullivan with his Trench Gun.

Sullivan being stabbed with a Katana.

Sullivan's corpse, about to be buried.
Add a photo to this gallery

Retrieved from "https://callofduty.fandom.com/wiki/Tom_Sullivan?oldid=2519023"
Community content is available under CC-BY-SA unless otherwise noted.