The Tomahawk is only seen in the first part of the level "Rebirth," where Alex Mason, at the advice of Reznov, picks it up uses it to stealthily kill a worker. He then uses it to kill a patrolling guard before discarding it and taking the guard's AK-74U. Unlike in multiplayer, it is a melee-only weapon, similar to the SOG Knife.

The Tomahawk is available for unlock at level 4 and costs

2000. It is similar to Call of Duty: Modern Warfare 2's Throwing Knife, instantly killing any player it hits. Unlike the Throwing Knife, however, the Tomahawk always bounces off walls and floors when thrown, making ricochet kills, or "bank shots," a more likely possibility.

It is one of the three weapons used in Sticks and Stones. It has a special effect; if a player hits someone with the Tomahawk, it resets the victim's score to zero, known as bankrupting, and will award the thrower with 10 points. 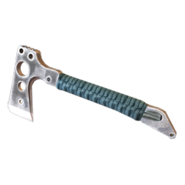 Render of the Tomahawk.

A player getting a kill with the Tomahawk in Sticks and Stones.

The Tomahawk as it appears in-game.

A player killed by a tomahawk.

The Tomahawk in Rebirth.

Tomahawk in Rebirth, seen at high Field of View

A Russian soldier blocking a Hatchet swing with his arm, in Rebirth.

The Russian soldier finally being killed.

In Campaign, the Tomahawk is used by Bell during the mission "Redlight, Greenlight" as the player's lethal equipment.

In multiplayer, the Tomahawk is unlocked at level 42.

In zombies, the Tomahawk can randomly drop from killed zombies, or be crafted for 100 common Salvage.

A maximum of 5 Tomahawks can be held.