Call of Duty Wiki
Register
Don't have an account?
Sign In
Advertisement
in: Call of Duty: Vanguard Zombies Utilities

The Tome of Rituals is a utility featured in Call of Duty: Vanguard Zombies mode. It allows the player to spend Sacrificial Hearts in exchange to upgrade their Field Upgrades. The utility was added on January 12th, 2022, with the release of Season One Reloaded.

The Tome of Rituals is a spellbook of Dark Aether rune magic written and compiled by the Société Occulte over centuries, with only their most inner circle being able to see and read it. The Société used it as a way to call upon Dark Aether entities, such as Kortifex, in an effort to increase the wealth and influence of its members. After a crisis in the 1920s, the Société took the book apart entrusting some of its members to hide the pages in sacred places around the world.

At the onset of the Second World War, Wolfram Von List, the leader of the SS unit Die Wahrheit, acquired several pages from a patron of the University of Leipzig who was a member of the Société. Von List had him arrested and tortured, learning about the location of other members of the Société. Soon after, Von List forced the demonologist Gabriel Krafft to help Die Wahrheit and reconstituate the Tome of Rituals. With his help, the SS unit discovered several artifacts around the world but proved little to no use to further the Nazis ideology of the superior Aryan race.

On March 7th, 1944, the incident at the Projekt Endstation in Poland awoke the artifacts. Von List took one of them and bonded with Kortifex who gave him the power to rise corpses from the dead, creating Revenants. Von List soon gathered all the pages from the Tome of Rituals and locked them away preventing anyone to access them. He then immediately launched an operation in Stalingrad. Fearing for his life, Krafft used one of the pages from the Tome of Rituals to seal himself in a room away from the revenants. 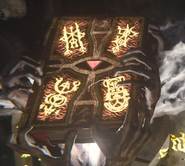 The Tome of Rituals in Der Anfang loading screen.

The Tome of Rituals, opened.