Outnumbered and Outgunned, Retaking Lost Ground
Toujane is a multiplayer map in Call of Duty 2. It features a North African town.

Toujane has a series of rooftops useful for sniping in the eastern area of the map, whereas the west has 2 large ones. In the British spawn zone, a tank is near where a flag would spawn in Capture the Flag. In the German spawn zone, the flag would spawn in the center of the area, surrounded by a set of small linked walls. Buildings face both flag zones, significant for covering flag runners. In the center of the map is a hut, where soldiers may spawn sometimes. It faces the direction of the British side of the map, and begins to slope downwards towards there. 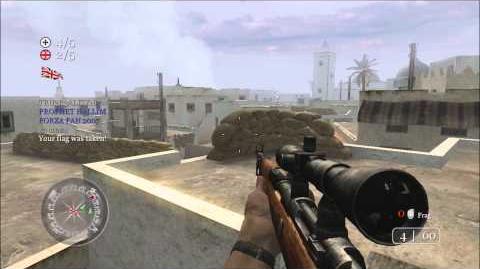 COD2 CTF Toujane
Gameplay in Capture the Flag.
Add a photo to this gallery

Retrieved from "https://callofduty.fandom.com/wiki/Toujane?oldid=2244278"
Community content is available under CC-BY-SA unless otherwise noted.