Town is a submap of the Zombies map Green Run in Call of Duty: Black Ops II. It is featured in the Survival and Grief modes and is the fifth location in TranZit. It was first seen in the Zombies Trailer.

Juggernog is located in the upstairs loft. The Bank is located here, behind a vault door in the bank building that must be blown open with explosives or the Ray Gun or Ray Gun Mark II.

The Pack-a-Punch Machine is located underneath the bank vault and must be assembled. To access this floor, the player must first stop at the Power Plant area. Upon opening the outhouse there is a door with a Green lightning bolt icon, a Turbine must be placed here (and possibly protected). The door in the vault will now be open until the Turbine expires, or is destroyed by a zombie. If done quickly enough, the player can take the Bus, otherwise the player would need to run to the town, or teleport at the nearest lamp post. It is easier in co-op, since one player can protect the turbine, while the other enters the Pack-a-Punch room in the town bank.

The Wonder Weapon featured in this map, the Jet Gun, is built inside the bar, next to Stamin-Up.

Semtex Grenades are inside the Rare Book Store, similar to Grief and Survival, but the door must be opened with a Turbine. Also, inside this room, a part for the Bus can sometimes be found.

Keep in mind that, unlike Survival or Grief, Town in TranZit does not have any weapons on the walls.

Lava cracks and pits surround the area and can damage the player. Stamin-Up, Juggernog, Double Tap Root Beer, Speed Cola, Quick Revive, and Tombstone Soda appear on this map; however, Tombstone will not appear when playing solo.

There is no power to turn on, which makes it easier to obtain perks and access the Pack-a-Punch Machine. Also, there are only two locations to which the Mystery Box can spawn to, either upstairs in the Bar flanked by a window-barrier, a panel-less ceiling and Quick Revive, or in the corner next to Double Tap Root Beer and Tombstone Soda. An MP5 is available in the north-eastern house, as is the Juggernog. The Bank contains no weapons, only Speed Cola. The Bar houses Quick Revive and the Galvaknuckles. Stamin-Up is at the southern corner of the map. The Olympia is located opposite Tombstone Soda. The M14 is located next to a barrier by the Bank door, opposite Stamin-Up. Semtex Grenades are located inside the Rare Book Store, across the street from the Box location near Double Tap Root Beer.

The Pack-a-Punch Machine is located in the lava pit in the middle of the map on Survival and does not move or disappear. However it can be difficult to get to since it requires a player expose themselves to lava for an extended period to use the machine, thus making Juggernog a viable option for survival.

One of multiple screams that can be heard either near Juggernog or Double Tap:

Screeching that can be heard throughout the north side of the Town:

One of multiple sounds of an infant crying that can be heard in the Bar, the Rare Books Store and the Juggernog building:

Menu selection image.
Add a photo to this gallery 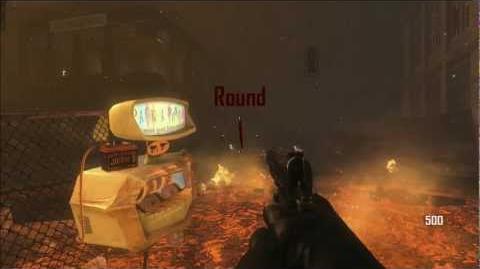 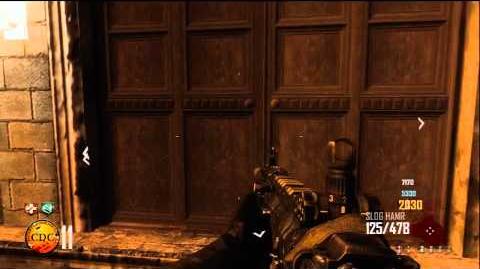 Retrieved from "https://callofduty.fandom.com/wiki/Town?oldid=2449017"
Community content is available under CC-BY-SA unless otherwise noted.