For other uses, see Tracker.

Tracker is featured in Call of Duty: Black Ops III as a Tier 2 perk. It shows enemy footprints for a short duration, allowing the player to easily detect enemies close by. Enemies with the Hard Wired Tier 2 perk will leave a shorter trail, which is still quite long.

"See recent enemy trails, even when they are cloaked."
— Create-A-Class Description.

Tracker returns in Call of Duty: Infinite Warfare. It lets the user see recent enemy trails, even when they are cloaked. It is unlocked at Level 8.

This perk directly counters the perk Dead Silence and Phantom's Active Camo payload, by continuing to highlight footsteps of players with the perk active or the payload active. 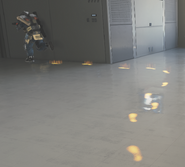 The orange footprints of a player being tracked. 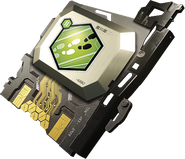 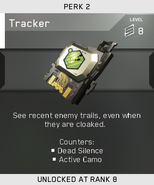 Tracker being unlocked in multiplayer.
Add a photo to this gallery

Tracker returns in Black Ops 4. It allows both the footprint tracking effect and a new effect, where an alert in the form of an eye icon is shown to the bottom right of the minimap when the user is revealed in the enemy Fog of War. However, due to the footprints being a hardly noticeable white instead of bright red or orange, the Fog of War alert being hard to notice, and the game's map designs not being conducive to the "sneak up behind" gameplay promoted by Tracker, it is very rarely used by players.

Tracker in Call of Duty: Mobile is identical to its original Black Ops III iteration, including being a Tier 2 perk partially countered by the Hard Wired Tier 2 perk.

"Enemies leave behind a footprint trail. See markers at enemy death locations, and hide the death markers of enemy you kill."
— Create-A-Class description

Tracker returns in Call of Duty: Modern Warfare, with enemy footprints glowing bright orange, but with the added effects of seeing the death markers above fallen enemies and hiding those of the user's victims, similar to Takedown perk in Call of Duty: Ghosts. This assists in locating enemy spawn points and where action is happening for increased situational awareness, as well as providing a stealth effect by hiding victim's death markers from the enemy. It is unlocked at level 51.

Retrieved from "https://callofduty.fandom.com/wiki/Tracker_(perk)?oldid=2490908"
Community content is available under CC-BY-SA unless otherwise noted.